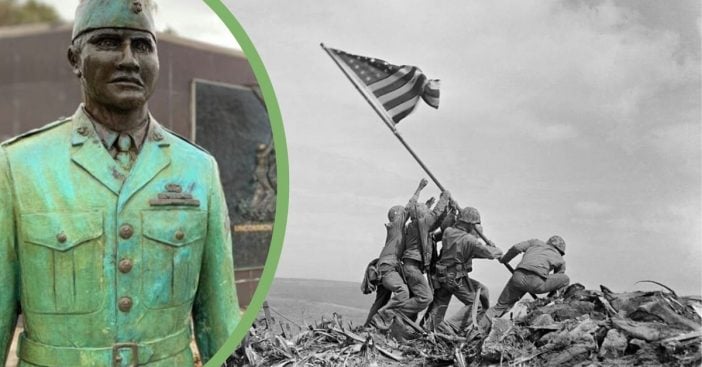 Some images live on for years. A single instant frozen in time can stop people in their tracks. Many images like this have won awards. One such picture is that of the six Marines raising the U.S. flag over Iwo Jima during World War II. The photo earned a Pulitzer Prize for capturing this moment during one of the harshest conflicts of the Pacific Theater. Standing on the left is Ira Hayes.

In the immortalized moment, he stands with arms outstretched, hands reaching for the pole. Though this picture captures that particular moment, his presence on Mount Suribachi also put him right in the thick of the conflict during that time. He survived the bloody event and even after 75 years, his story inspires his old community.

Iran Hayes’ battles did not end with the war

The Battle of Iwo Jima lasted from about February 19 to March 26, 1945. Those five weeks became some of the bloodiest during the Pacific War. And with that intense conflict came a lot of loss. Ira Hayes, a Native American from the Pima reservation, survived that deadly conflict. He avoided death in an area that rained it down in waves. That itself is remarkable, but what truly inspires his home community is his resilience. You see, Ira Hayes returned to the U.S. with intense PTSD.

Additionally, though living through the battle is a commendable feat, it didn’t always feel that way for him. Hayes came to develop survivor’s guilt. At that time, veterans had far fewer resources and the mental trauma they endured wasn’t as well understood as it is today. Hayes did not have the immediate medical and psychological attention he needed, but he did receive intense respect from the Gila River Indian Community. Even 75 years later, his struggles inspire strength to all who learn his story.

Recently, the Gila River Indian Community celebrated the 75th anniversary of the flag-raising, USA Today reports. There, Ira Hayes was revered as a hero and source of inspiration. Hundreds of people, from locals to outsiders, flocked to the Veterans Memorial Park to witness the military parade. All of this occurs not far from where Hayes’ story began; he was born in Sacaton, Arizona in 1923. His actions earned Hayes the Navy and Marine Corps Commendation Medal and Combat Action Ribbon. Upon returning home, Hayes received a hero’s welcome and starred in The Sands of Iwo Jima (1949).

At the local level, he represents resilience and endurance. One fan of his, Valerie Fagerberg, cites his strength as reason for awe. “For him to go through what he was put through and for this community to come together and honor him, as a tribal member, makes me very proud,” she explained. His family carries on his legacy to keep inspiring others. USA Today explains how Hayes’ mother, Nancy Whittaker Hayes, was sisters with Wayne Allison’s great grandmother, Emma Whittaker. Wayne elaborated on his own feelings, saying, “It means a lot to us, the family, knowing that there was a Native American who raised the flag [and] became symbolic of America.” Ira Hayes remains to celebrated that community members Lancelot and Shirley Lewis spearheaded construction of a statue in his honor. There, the community recreates the historic scene Ira Hayes helped establish decades ago.

Click for next Article
Previous article: Do You Remember These Popular Bands From The ’70s? You Probably Forgot They Existed!
Next Post: Learn How To Make Those Yeast Rolls You Remember From The School Cafeteria