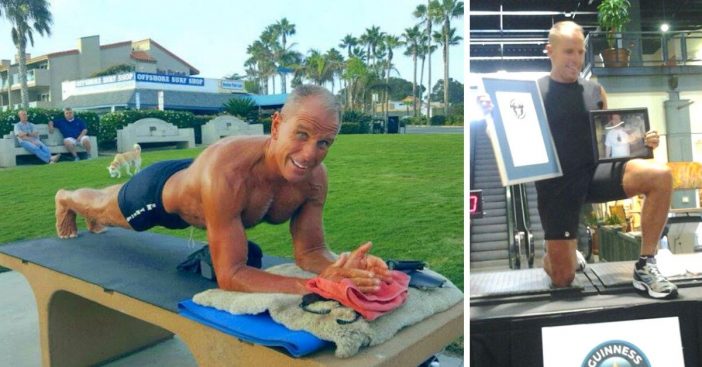 62-year-old former Marine George Hood recently set a very impressive record. He set the Guinness World Record for the longest time in the abdominal plank position. He held a plank for 8 hours, 15 minutes, and 15 seconds! Can you imagine what that would feel like?

There is also a female Guinness World record for the plank. It is held by Dana Glowacka who held the plank position for 4 hours, 19 minutes and 55 seconds. George previously set the record but was beat by Mao Weidong. George vowed to hold the title once again.

George also revealed a few things that kept him going when he wanted to give up. He shared, “When it gets tough, you know what I do? I turn that music up so loud, you’d think you’re at a rock concert. I always had a fantasy of being a rock star back in the ’80s. And at least for those 8 hours, 15 minutes and 15 seconds, I was a rock star.”

Not only did George want his title back, but he also wanted to raise awareness of mental illness, especially concerning those in the military. He belongs to 515 Fitness, which is a gym that uses exercise and professional help to address mental illness.

George pushed himself to get to the 15 minute and 15-second mark to dedicate his record to 515 Fitness. After he finished, he did 75 pushups! George said his next goal is to set the Guinness World Record for the most pushups in on hour. The record is currently 2,806 pushups.

Lastly, George gave some words of wisdom. He said, “Everybody has to start somewhere. Every tree that’s planted has roots. Once that tree is planted and those roots start to grow, whether it be 30 seconds or a minute or 5 minutes or an hour (of holding a plank), you start repeating the process and taking care of your tree, it will grow and you will improve and you will actually get better.”

Click for next Article
Previous article: WATCH: 84-Year-Old Woman Sinks 94-Foot Putt And Wins A Brand New Car
Next Post: Dog Shows Up At Police Station To ‘Report Himself Missing’