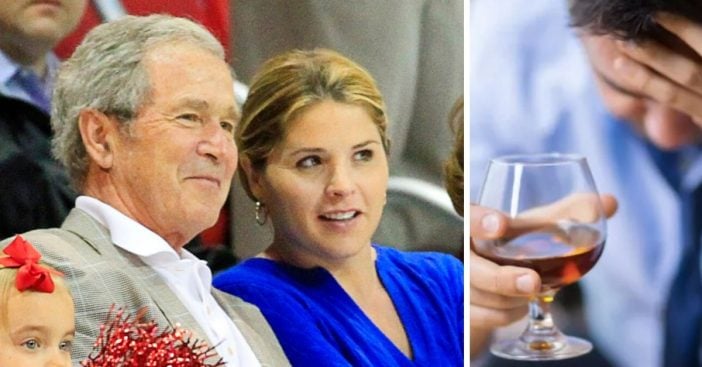 Being a mom of three, Jenna Bush-Hager admits that she finds herself wanting to reach for a glass of wine at the end of the day. The stress builds up for sure! However, she recalls a conversation that she had with her dad about drinking and alcohol nearly 20 years ago. She recalled this conversation on TODAY with Hoda & Jenna. Her father, George W. Bush, allegedly pulled Jenna aside after a family wedding to share his views.

“I’ll never forget I was in Maine for my cousin’s wedding. … We went for a walk, and he said, ‘I just want to talk to you about drinking — and I found in my life it got in the way of the things that mattered most — and I want to make sure that you just know that it can and be aware of it,”’ Jenna recalls.

Bush even wrote in his 2010 book Decision Points about how he gave up drinking for first lady Laura Bush. She gave him the decision to choose drinking or fatherhood. “I think at the time I probably was like, ‘I’m not even that hungover,”’ Jenna says about that conversation. “But I do think it was such a model to me about how I want to parent, which is to be transparent about either things that have happened in our family’s past, or things that you know that can happen to your kids.”

While Bush did not go to Alcoholics Anonymous, he did remove alcohol from his life completely. “He said, ‘I just want you to know that there was a point in my life where I thought like this is interrupting what’s beautiful,”’ Jenna remembers. “He just knew that it was interrupting his dreams and interrupting his parenting. I always appreciated it, and I still do.”

Jenna gains inspiration to talk about her conversation with her dad from 20 years ago after an interview by Ben Affleck. He spoke with the New York Times about his struggles with alcohol abuse. “You’re trying to make yourself feel better with eating or drinking or sex or gambling or shopping or whatever,” Ben says in his interview. “But that ends up making your life worse. Then you do more of it to make that discomfort go away. Then the real pain starts. It becomes a vicious cycle you can’t break. That’s at least what happened to me.”

As a result of this, Jenna praises Ben for being so raw and honest. “He has little kids who can think like, ‘Dad talked about with honesty and transparency how hard it is to be addicted to something, how hard it is to deal with pain by doing something that’s not good for you,”’ Jenna says. “To have that conversation, he doesn’t even know how many people he’s probably helping.”

Jenna ultimately credits her father for helping her outlook before becoming a mother herself. “Parenting is tedious and can be difficult, and it can be easy to open that bottle of wine at 5 o’clock on a Monday,” she says. “But I catch myself because I had those conversations (with my father), and I try not to — for my kids and for me.”

Click for next Article
Previous article: Steve Irwin’s Kids Post Loving Messages On What Would’ve Been His 58th Birthday
Next Post: Beloved Minnesota Bus Driver Is Honored With Special Casket