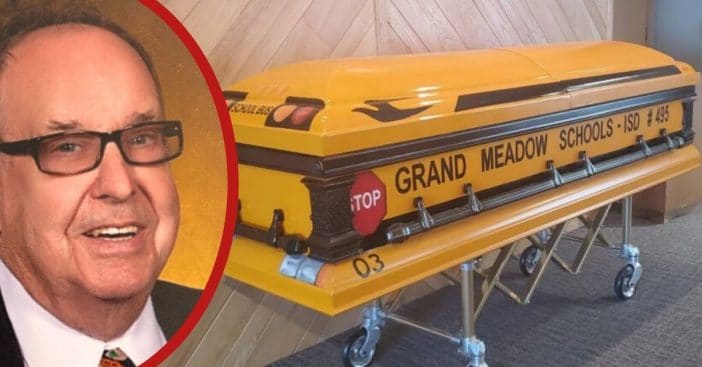 Some people can impact our lives in surprising ways. While some strangers come and go, others leave an impression. Even those who we see every day don’t always shape our lives in any particular way. But one Minnesota school bus driver became truly beloved by the students. As a result, after his sad passing, he was honored with a special casket.

The coffin in question was themed like the bus where he made everyone’s days just a bit brighter. Glen “Glennie” Paul Davis actually left a mark on the whole community. That is, in part, because of how long he drove a school bus. Multiple generations ended up having Glen as a driver and he supported those around him on and off the clock.

Glen Paul Davis supported everyone around him

According to Glen’s obituary, he drove for the Grand Meadow School. There, he supported the school, students, and the Superlark teams in equal measure. In fact, he rarely missed an opportunity to cheer the Superlarks on. Throughout his 88 years, he spent about 55 of them driving the school bus for Grand Meadow Schools. Davis also lived his whole life there, giving him time to become part of the area itself.

RELATED: Bus Driver Buys Breakfast For 50 Students Who Couldn’t Eat Due To A Storm Delay

From 1949–2005, he “had the chance to drive multiple generations of some local families,” his obituary reads. He passed away on February 15 and left behind many souls who loved him. Throughout his life, he built a solid community as well as a big family. He and his wife Shirley Evenson had five children together. Shirley predeceased him after sharing 40 years of marriage together.

The Minnesota bus driver got a fitting tribute to honor him

While establishing himself as a constant, caring presence in the community, Glen Paul Davis also became many people’s bus driver. As a result, the community is honoring him with a bus-themed casket. The casket is an entirely custom design modeled after the vehicle through which Glen reached so many people.

Reading his obituary makes it seem that this is exactly what Glen would have wanted. His obituary states, “was proud to drive school bus for Grand Meadow Schools for 55 years.” Over time, the students gave him the nickname Glennie. The obituary also points out, “The Post Bulletin did an article on Glen in January 2015 to highlight his commitment to bus driving,” evident in the fact that he “never had an accident” throughout all those years. Hindt Funeral Home of Grand Meadow donated the custom casket so Glen could be properly honored for his devoted service to his community.

RELATED: 5 Surprising Secrets About Ice Cream Trucks From The Drivers Themselves