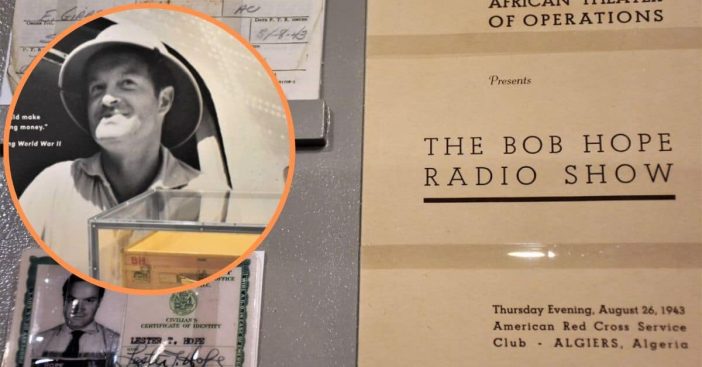 Earlier this year, the National Veterans Memorial and Museum opened a new exhibit called “So Ready for Laughter.” The exhibit honors the late, revered Bob Hope. The Columbus-based exhibit first and foremost focuses on Hope’s career entertaining the military. Said career actually spans half a century and made the man beloved among the troops.

The exhibit’s name actually comes from a quote by Bob Hope himself. He got a very early start to his career and kept himself very busy. Yet he was always aware of how little he could have predicted what the next day promise. He wrote, “I was resisting an idea that would change my whole life. We had no idea we were going to encounter an audience that was so ready for laughter.”

Some people really figure out what they were meant to do. Bob Hope was one such person, perfectly falling into his niche and thriving there for all the world to enjoy. The English-American entertainer became known for his stand-up, dancing, singing, athleticism, and acting. His entire career actually spanned almost 80 years in total. Hope was born as Leslie Townes Hope. A plaque now rests at his old home in Eltham, County of London. Born in 1903, he moved with his family to the United States at around age 5.

By the age of 12, Hope already showed proficiency as an entertainer by busking. He also performed comedy, sang, and danced. His routines ended up drawing a lot of positive attention. His interests didn’t change and he focused on developing his career, eventually renaming himself to Bob so his name had a “friendly ‘Hiya, fellas!’ sound” to it.” His career gradually included a lot of vaudeville and movies. Finally, he ended up working with the USO. His first performance through the nonprofit came on May 6, 1941. So began another branch of his legacy

The “So Ready for Laughter” helps museums honor Bob Hope

During just the summer of 1941, Bob Hope starred in 150 shows in the South Pacific. This was not where Hope imagined his career would take him and made this decision with great care. When he met his audience, though, he realized everyone there was “so ready for laughter.” He then obliged. Lt. Gen. Michael Ferriter called him “a soldier’s entertainer.” Ferriter is also president and CEO of the National Veterans Memorial and Museum. “He probably didn’t talk to the generals and admirals when he visited. You can sense that in 2 seconds. He wanted to get to the soldiers. He portrayed a real understanding of the day-to-day stuff they go through.”

The National World War II Museum is loaning the exhibit to Ferriter’s. The exhibit will include a lot of important items from Bob Hope’s life. It includes his suitcase, USO ID card, and radio broadcast scripts. Additionally, visitors can see his diary from 1944 and gifts from fans. Finally, they can watch a video that further explores Bob Hope’s impact on the troops he entertained and comedians he influenced. Based on other videos of Hope, despite his initial uncertainties, he felt glad for the path he traveled.