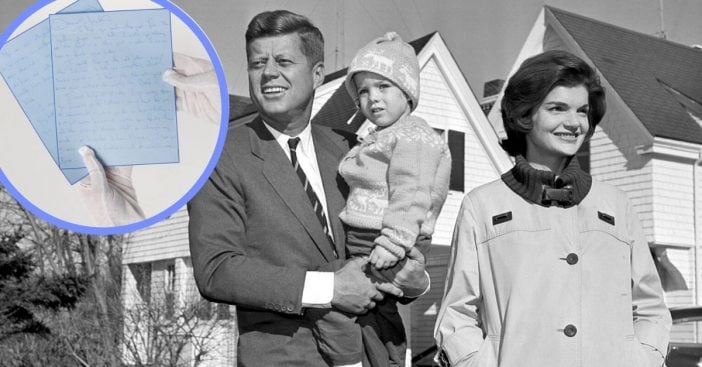 Primary source documents offer the best look into a person’s mindset. They are useful tools for understanding grand historical events and small interpersonal relationships. Because of how telling they are, letters are a historian’s greatest treasure. Recently, the John F. Kennedy Library Foundation received a particularly special new treasure. That newest addition is a letter written by Jackie Kennedy in 1957.

Overall, that letter contains very valuable emotional insight into a presidential family. Jackie Kennedy addresses her husband, “Jack,” with thoughts of love for him and the newest addition to their family. Shortly before writing that letter, Jackie gave birth to their firstborn, a daughter named Caroline. Caroline’s birth came after previous unsuccessful pregnancies. Now, that emotional letter is part of the John F. Kennedy Library Foundation.

“Dearest Jack,” the letter begins. By the end of her letter, composed of sheets of light blue paper. She concludes with “All my love, Jackie.” Everything between those lines, above all, provides insight into the relationship between the 35th president and first lady. Interestingly, at the time that letter was written, Kennedy was a senator for Massachusetts. Still, we learn some of Jackie Kennedy’s thoughts on many personal topics. For example, when away from Kennedy she composed letters she herself described as “stiff.” She dubbed them that because “It is hard for me to communicate — which you do so beautifully.” Though written words don’t let all the deeper thoughts to flow properly, Jackie did her best.

RELATED: These Are The Ways Jackie Kennedy Changed The White House Forever

“I know everyone says married couples should never separate — as you get off the same wavelength — It is true you do — but I think it is usually good when we go away from each other as we both realize so much,” she further wrote. “We are so different — but I was thinking this trip — that every other time I’ve been away, you would write ‘don’t ponder our relationship too much’ etc. — [and] now I don’t, as one doesn’t ponder anything that is a part of you —”

In her letter, Jackie Kennedy references the birth of their firstborn, Caroline. She celebrates their daughter’s arrival with, “at last a baby we both love.” Even at such an early point in their eventually famous lives, Jackie seemed to sense something unique about their family. “You are an atypical husband—increasingly so in one way or another every year since we’ve been married—so you mustn’t be surprised to have an atypical wife—Each of us would have been so lonely with the normal kind. I can’t write down what I feel for you, but I will show you when I am with you—and I think you must know—.”

Foundation chief financial officer Doris Drummond considers the letter to be very “important.” On Tuesday, December 7, the letter returned to the foundation as a donation. At the end of the day, however, it will be held with other historical records. “It’s in the proper place, it’s in a good place,” Drummond said. “It’s in the proper holding place, rather than being auctioned off. We appreciate RR Auction giving it to us and not auctioning it off. I think that’s such a great decision by them. It’s wonderful.” Bob Eaton, CEO of RR Auction House gifted the letter during a small ceremony. This came after the auction house initially purchased the letter.

RELATED: 55 Years After JFK’s Presidency: See What The Kennedy Grandkids Are Up To Now