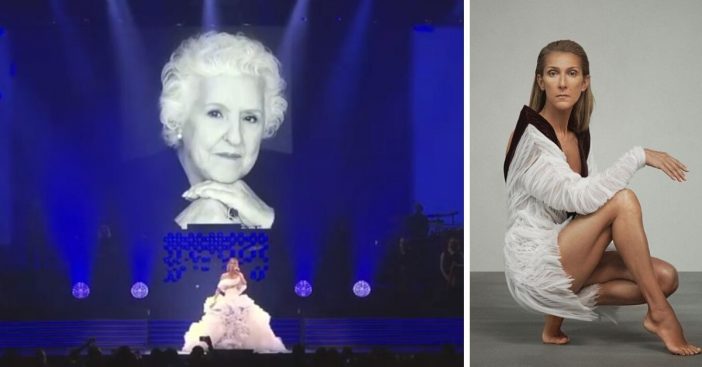 Last week, Celine Dion sadly lost her 92-year-old mother Thérèse Tanguay-Dion. Her mother passed on the fourth anniversary of Celine’s brother’s death and just days after the anniversary of her husband’s death. It had to be a very hard loss. To pay tribute to her mom, she sang “Somewhere Over the Rainbow” at a recent concert.

Celine is still on her “Courage World Tour.” During her Friday performance in Miami, Florida, she sang a very beautiful version of “Somewhere Over the Rainbow.” Fans were very moved by the performance, giving Celine a reported five-minute standing ovation.

Recently, her management released a statement about Celine’s mother’s death. She died on Thursday after battling serious health issues. The statement read, “It is with deep sadness that Feeling Productions announces the death of Mrs. Thérèse Tanguay Dion. Mrs. Dion died peacefully at home last night, surrounded by her family. The family and loved ones thank you in advance for respecting their privacy during these difficult times. Details related to the funeral will be communicated later.”

Before her show on Friday, Celine posted a photo and wrote, “Maman, we love you so much… We dedicate tonight’s show to you and I’ll sing to you with all my heart. Love, Céline xx…” She often referred to her mother as “Maman Dion.”

Celine shared a photo of an old black and white family photo. Her father Adhémar Dion, died at the age of 80 in 2003. Thérèse had 14 children and was also a television host and philanthropist. Sending our thoughts and prayers to Celine at this difficult time. Watch the performance below: