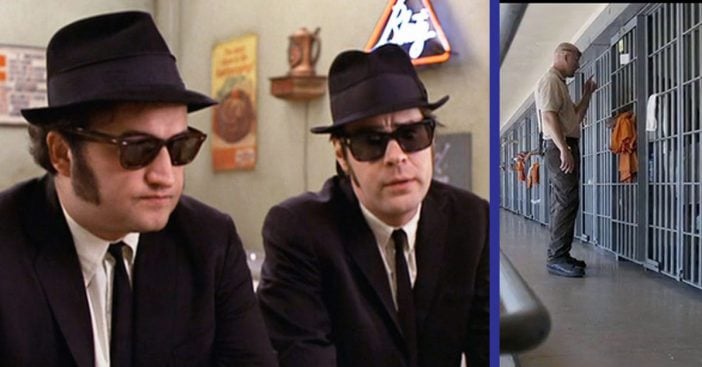 In 1980, “Joliet” Jake and Elwood Blues set out to save their old orphanage. Their journey has them crossing paths with a murderous woman, hate groups, a rival band, and officers of the law. But these two persistently seek redemption for themselves and a reprieve from the Catholic orphanage that raised them. To save the place from foreclosure, they reunite their old R&B band to raise the necessary funds. This summer marks the 40th anniversary of The Blues Brothers and a cult classic deserves a big celebration.

The movie is getting a rather symbolic one, to be sure. An opening scene for The Blues Brothers took place at the Old Joliet Prison on Collins Street, and that’s where the anniversary celebration is taking place. In the movie, the brothers perform behind chicken wire in front of less-than-welcoming spectators. The Blues Brothers became such a classic that the prison was eventually dubbed based on the name from the movie. Now, both setting and characters reunite to celebrate the 40th anniversary.

The Blues Brothers had a bit of something for everybody

As a movie, The Blues Brothers gave audiences a bit of everything. The brothers had a heartfelt mission that anyone in their position would want to accomplish. But it also embraced its roots as a musical comedy. It had an exaggerated premise, witty lines, and an engaging dose of spectacle. The spectacle, in this case, doesn’t refer to the unreal explosions and abundant gore seen in some movies today. Instead, audiences saw lovingly composed musical numbers. They also heard historical vocal talent belting out those tunes as well. James Brown, Aretha Franklin, and Ray Charles are just some of the artists who have musical numbers in the film.

RELATED: Sony Releasing A Walkman In Honor Of Its 40th Anniversary

Additionally, those who primarily acted brought a lot of fame with them as well. Supporting cast included John Candy, Carrie Fisher, Henry Gibson, and Charles Napier. Unfortunately, not all of these beloved names can be a part of this celebration of the movie, but event planners still have nostalgia-driven ways of successfully honoring the movie.

Ultimately, celebrating The Blues Brothers on its 40th anniversary is going to be grand and impactful

Just as the original movie was mindful of what it was, event planners behind this celebration are aware too. Greg Peerbolte, executive director of the Joliet Area Historical Museum, wants everything to be carefully planned. “We’re going to do a Bob’s Country Bunker stage,” he explained. A lot of these organizations are connected, so coordinating should be easy. The Joliet Area Historical Museum already organizes tours and other events at the former Joliet Correctional Center. For this anniversary event, they shall have screenings of the original movie, tribute bands, and presenting a replica of the stage from the movie.

Currently, August 21 and 22 look like the final dates for the two-day anniversary celebration. Some final arrangements remain to be made, so this could be subject to change. What isn’t changing, however, is everyone’s determination to make this both nostalgic and impactful. Peerbolte told the Joliet City Council Prison Committee, “If we do get Dan Aykroyd, you’re going to hear me screaming from the museum.” Akroyd actually played Elwood Blues. Even if they don’t achieve this, their The Blues Brothers anniversary is supporting a good cause. The celebration shall double as a fundraiser supporting prison restoration.

Click for next Article
Previous article: Sadie Robertson Shares Adorable Clip From Her Wedding Video
Next Post: Robert Redford Leaves Fans In Limbo About His Retirement