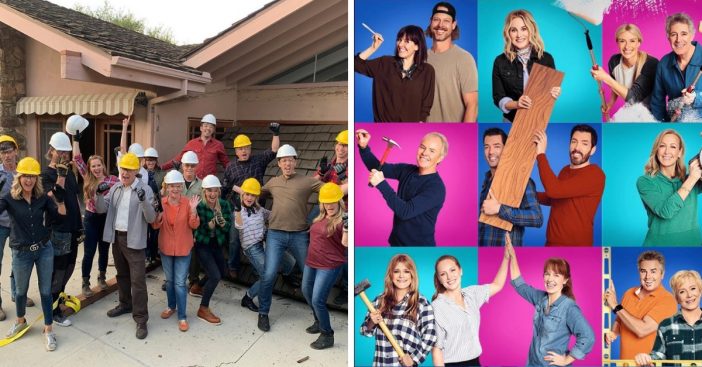 The new HGTV series A Very Brady Renovation re-created that famous opening from The Brady Bunch. You know the one… with the catchy song and the actors who appear in those little boxes. The show even created new lyrics to go along with the opening!

The new opening for A Very Brady Renovation changed the lyrics to the catchy tune. It also shows some old clips from The Brady Bunch, along with photos of the interior of the real Brady House prior to renovations, and the new cast of the show.

The show premieres on Monday

Countdown to Sunshine Day and the grooviest series premiere of the year…Monday, September 9 on HGTV! Tag that “bunch” of friends you’re inviting over to watch “A Very Brady Renovation.” #verybradyreno 😎 pic.twitter.com/23lAC46qbH

The new cast includes all of the kids from The Brady Bunch as well as some HGTV stars. The stars teamed up with the actors to renovate different areas of the home. The actors used their knowledge of the Brady Bunch set to help the renovators make everything look perfect.

The lyrics to the opening go like this: “Here’s the story/Of a TV family/Who we all thought lived inside this famous home/But the real house/We all remember/Was not at all as shown/So we bought the place and brought back all the Bradys/Who know every room and corner in and out/And we paired them with the HGTV family/That’s the way we all remain the Brady house.”

The HGTV President released a statement on the new show

According to TODAY, HGTV president Jane Latman said, “HGTV left no stone unturned, creating a perfect replica of the home down to the horse statue next to the staircase and the stuffed animal giraffe in the girls’ bedroom. Viewers will be on the edge of their seats each week to see how we pulled it all off, and we can promise they’ll be transported back in time when they see the final result.”

The opening and the renovation isn’t the only thing they brought back from The Brady Bunch. Some of the actors had fun recreating some classic scenes from the show. Do you remember when Marcia gets hit by a football and gets a swollen nose? Christopher Knight (Peter) and Maureen McCormick (Marcia) recreated that scene as a joke during filming.

We hope there will be lots of other references to the original series! We also can’t wait to see what the completed renovations will look like. The outside of the iconic home will finally match the set. Check out the first episode of A Very Brady Renovation on HGTV on Monday, September 9 at 9 p.m. ET.

Watch the opening below:

🎶That's the way we remade the Brady house! 🎶 We cannot wait to share this iconic project with you. A Very Brady Renovation premieres Sept. 9. #verybradyreno pic.twitter.com/cIEoKEsFZJ

Check out another teaser before the show airs!