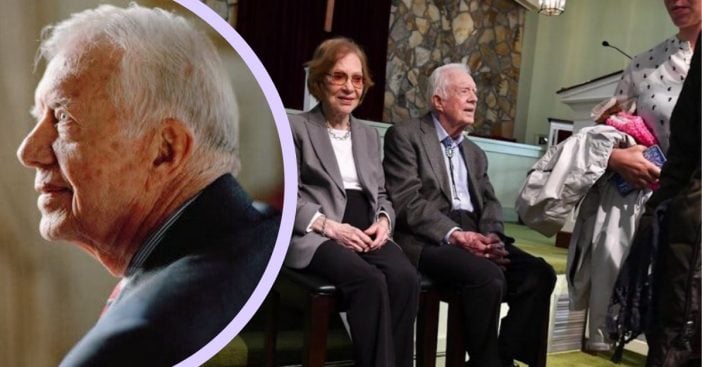 Former president Jimmy Carter has endured many health scares over the last few months. None have stopped him from doing what he wants for long, however. After several falls, Jimmy received brain surgery, always an intimidating and involved prospect. Not long after, he was up walking around again. In fact, on December 29, Jimmy Carter returned to church with his wife Rosalynn.

His return was very subdued, reports CNN. There was no call for any big fanfare or publicity. Instead, he and the former first lady quietly sat together at his hometown church in Georgia. Previously, Jimmy taught Sunday school. His medical needs put a pause on those lessons while his niece, Kim Fuller, gave inspirational messages in his absence.

Jimmy doesn’t seem ready to let anything slow him down. The former president, 95, sat front and center at Maranatha Baptist Church in Plains, Georgia. Steadily resuming his usual routines means all likely went well during his two-week stay at Emory University Hospital in Atlanta. After undergoing a procedure to relieve pressure on his brain, Jimmy took the time to recover before leaving a bit before Thanksgiving. He was also admitted to Phoebe Sumter Medical Center following a UTI.

The Carter Center released a statement following Jimmy’s health scares and persistent recoveries. “He said he looks forward to further rest and recovery at home in Plains, Georgia. He and Mrs. Carter wish everyone peace and joy this holiday season,” the statement read earlier this December. Familiar surroundings of home do make for an ideal recovery setting, and we’re very glad he has that comfort throughout all these ordeals.

Jimmy Carter still has a lot he wants to do

At 95, Jimmy is the oldest living former U.S. president. He reached this milestone after surviving brain and liver cancer. Much later, several falls further seemed to compromise the former president’s health. Not to be deterred, however, Jimmy Carter’s fought through it all, making his return to his hometown church all the more triumphant. He has attended Maranatha Baptist Church since 1981 after stepping down. Only a few years later, he began his Sunday school lessons.

In that time, he delivered over 600 lessons to the church school. Though Jimmy seems intent on continuing his old routines again, those around him – encouraged but cautious – want him to focus on his health. Maranatha Baptist Church released a statement after his December release saying as much, stating, “although [Carter] has been released from the hospital from his surgery, we want to make sure he takes the full surgery recovery time before teaching again.” Hopefully, he stays mindful of his limitations so we can keep celebrating his many philanthropic deeds for years to come.