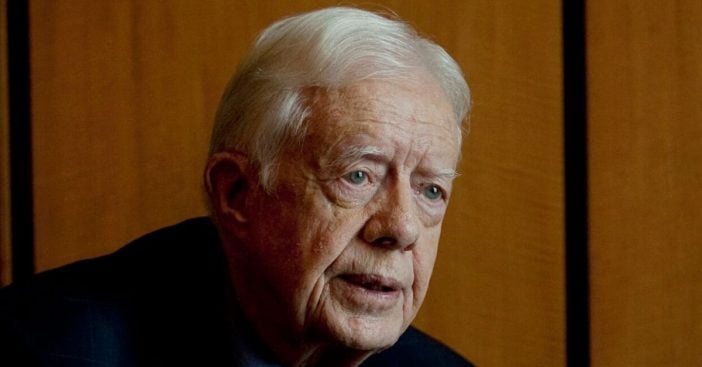 Former U.S. President Jimmy Carter has been hospitalized for a urinary tract infection (UTI). a spokeswoman for The Carter Center, Deanna Congileo, releases a statement on Carter’s hospitalization. She says he was admitted to Phoebe Sumter Medical Center in south Georgia over the weekend.

“We will issue a statement when he is released for further rest and recovery at home,” she says. A statement issued on The Carter Center Twitter account says that Carter is already looking forward to going home and says he feels much better already!

Former U.S. President Jimmy Carter was admitted to Phoebe Sumter Medical Center in Americus, Ga., this past weekend for treatment for a urinary tract infection. He is feeling better and looks forward to returning home soon. https://t.co/UHHhpTGHVj

Carter has had quite the year with some health issues and other mishaps. At the beginning of the year would begin his series of falls and that first one would result in hip surgery. A few months ago, the 95-year-old fell again and received stitches in his head and a black eye. Despite this, he returned to working with Habitat for Humanity the same day as his release. Later that month, he would fall again and was briefly in the hospital to treat a pelvic fracture. He also just had brain surgery a couple weeks ago!

RELATED: Jimmy Carter Is Walking Just A Day After Having Brain Surgery

Many friends and fans of the political figure are sending prayers and well wishes to him. “Be better soon, #President #JimmyCarter Prayers and all good things coming your way,” someone writes on Twitter. Another person says, “Cranberry juice time!” as cranberry juice is often a great aid in UTIs.

Well wishes for Mr. Carter’s health and may he finish out the 2019 year without any more hospital visits!