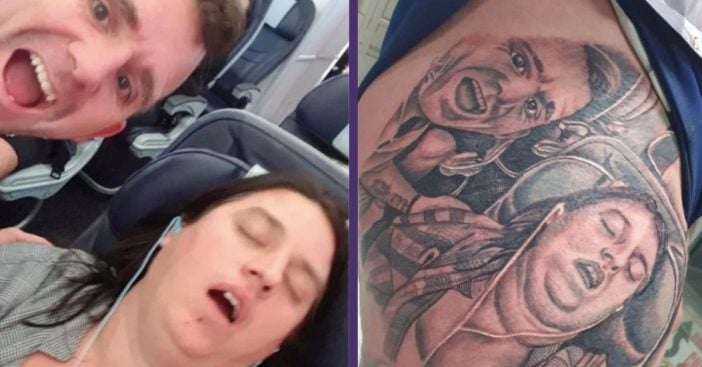 One UK man just horrified the living daylights out of his wife as he got a tattoo on his thigh of her snoring! James McGraw, 40, wanted revenge on his wife, Kelly, for giving him a bad haircut as a prank. So, as a result, he took a photo of his wife sleeping during a trip and got that photo tattooed on him. In the photo/tattoo, her mouth is wide open as she snores, blissfully unaware of the photo being taken.

The tattoo is nearly an exact replica of the original photo! Of course, this whole situation did not go over well with his wife. She tells The Sun that he had gone too far. The couple reportedly plays tricks and pranks on each other and have been for 24 years now. However, Kelly states “there’s a line and he’s crossed it big time.”

Husband gets tattoo of wife snoring…. the result?

James would post a photo of the prank on Facebook with the caption, “Don’t know what her problem is . . . everyone else seems to like it.” He is right about that, the photo went viral on the Internet with a large number of comments and reactions. Many people are commenting “legend” and “can’t stop laughing every time I see this.”

However, there were people who were not totally in favor of the prank. One person writes, “I think it’s both ugly and mean.” Another person says, “[My husband] just showed me this I would kill him.”

However, it looks like now Kelly is moving past the tattoo and actually thinks it’s quite funny! She can’t help but laugh every time she looks at it, she tells The Sun. She does say, though, that James better watch his back! “I’ll think of something to get him back, but it’s going to have to be really, really bad to top that.”

“I’m also scared because I don’t know what she’s now planning,” James says. Have you ever pulled a prank on your spouse/partner that may have been crossing a line?