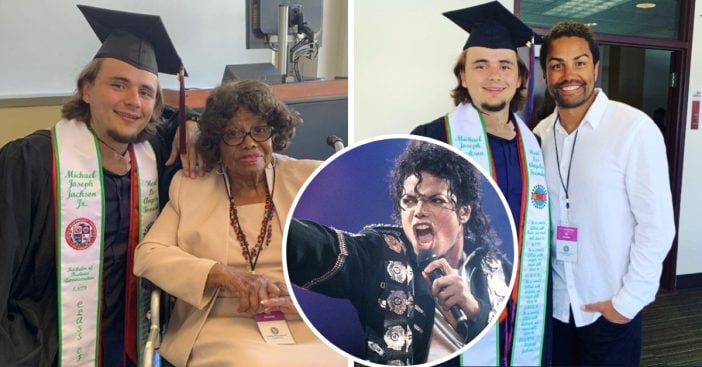 Many members of Michael Jackson’s family have been keeping it lowkey over the last several years and one of them just graduated from college! The late singer’s son, Prince, graduated with a Bachelor’s degree in Business Administration from Loyola Marymount University!

From the looks of the photo, picture perfect moments were taken of Prince and many of his family members, friends, and academic advisors on or around Mother’s Day. He made sure to post the photos in honor of “some of the strongest women I have been fortunate to know and love so closely in my life and who deserve recognition on Mother’s Day.” Be sure to scroll through the photos using the right arrow on the photo collage!

Prince’s cousin, TJ Jackson, also wrote a sweet caption for the graduate alongside a photo of the two. He said,  “Prince, it’s been a long road but you did it. Keep learning, keep growing and keep giving back! So so proud of you. I love you. #graduation #congrats #proudcousin.”

Prince was also sure to let his following know that he rode his motorcycle to the graduation ceremony. He attended Loyola Marymount University in Los Angeles and had been in attendance since 2015.

Prince, it’s been a long road but you did it. Keep learning, keep growing and keep giving back! So so proud of you. I love you. 📚 🎉 🍾 #graduation #congrats #proudcousin pic.twitter.com/Ij2I2TDZb8

Prince is the eldest child of Jackson, who died back in 2009 after an apparent cardiac arrest at age 50. More recently, Jackson’s youngest song also made a very rare appearance when he came out with a group of his friends and family to see the box office hit Avengers: Endgame.

Bigi is the youngest son of Jackson and an unidentified surrogate, while Paris and Prince’s mother is Debbie Rowe. She was married to Jackson from 1995 to 1999. This is a super rare occasion as Bigi rarely ever makes these kinds of public appearances, even in just photos, although the 17-year-old did appear in a Jackson family photo on Christmas in 2017.

Prince talked to TODAY back in 2017 about his connection to his siblings and how well they get along. From what he says, it sounds like they all get along pretty well! “Me and my siblings, we get along really well. Especially my sister, she’s grown so much, and I think she’s been able to really step up. And I don’t really see myself as her older brother. It’s kind of like we’re equal partners when it comes down to it. And Bigi’s just so mature for his age — it’s a pretty strong bond,” he says.

Sounds like the Jackson family children are doing pretty well! Congrats to the newest graduate!

Be sure to SHARE this article if you love the Jackson kids!