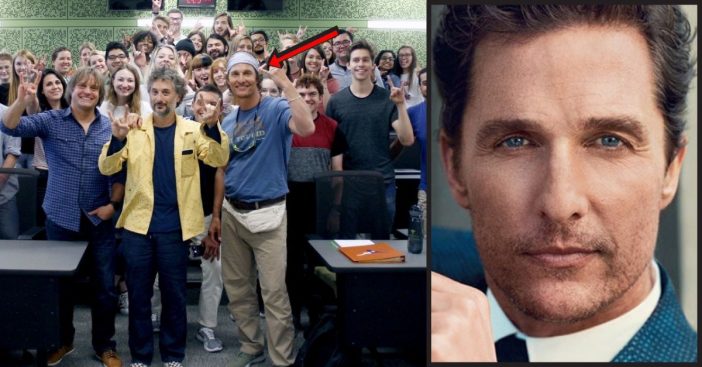 What if you walked into a classroom one day and Matthew McConaughey was the professor? This is becoming a reality for many University of Texas students, as he is a full-time professor there now! The Academy Award-winning actor has been appointed as a professor of practice at the Moody College of Communication. Classes begin this fall!

The university actually makes a full announcement on social media. “In recognition of his professional pedigree and personal investment in student success, Matthew McConaughey has been appointed a #TEXASMoody professor of practice,” they say.

McConaughey is no stranger to the University of Texas

In recognition of his professional pedigree and personal investment in student success, Matthew McConaughey has been appointed a #TEXASMoody professor of practice. @McConaughey will continue to teach the #UTScriptoScreen class in @UTRTF. pic.twitter.com/9goKkc6U0A

In addition to this awesome new job opportunity for the actor, he is also set to join the Department of Radio-Television-Film after serving as a visiting instructor since 2015. As a result, he’s definitely been making his rounds on the campus of the University of Texas!

Moreover, he co-taught the ‘Script to Screen’ film-production class with another professor. In conclusion, the class’s objective is to help give insight into what goes on behind the scenes of film production.

McConaughey has nothing but good things to say about that ‘Script to Screen’ class. For instance, he says he wishes he had a class like that when he was studying back in school.

He says, “Making movies, turning words on paper into film, is both a science and art – no matter the time or generation. The elements of truth and genuine joy for the process are timeless. That will always be our classroom focus.”

McConaughey himself actually graduates from the University of Texas in 1993 with a degree in film. As a result, this makes him best suited for teaching these courses! The actor has experience in more than 50 films to this day. For instance, this includes Interstellar, The Wolf of Wall Street, and Dallas Buyers Club. He also has experience in producing, most notably for HBO’s True Detective.

Moody College Dean Jay Bernhardt speaks about the opportunity to have McConaughey join the university as a professor. “We are proud to welcome Professor McConaughey to officially join our world-class faculty,” he says. “Matthew cares deeply for our school and our students, and we are thrilled that he shares his time and talent to help prepare the next generation of media leaders and innovators.”

How exciting to have an award-winning actor come in and teach film courses! In conclusion, where do I sign up?

Find out who Matthew McConaughey’s first celebrity crush was!