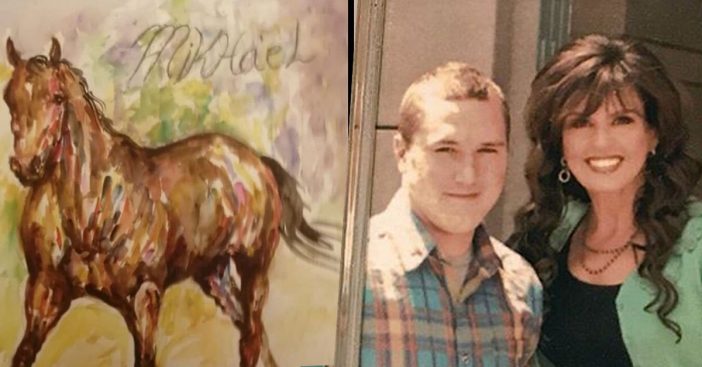 Marie Osmond recently paid tribute to her late son Michael in the sweetest way. Michael passed away in 2010 after taking his own life. Marie has been very open about Michael and the struggles that her family has faced after his death.

One of her friends owns racehorses and let Marie name one of the new horses. She decided to name the horse Mikhael after her son Michael as a tribute. Marie decided to spell the name Mikhael because it is the Hebrew spelling that means “Godly.” She posted a painting of a horse with the name Mikhael to share the story with her fans on Instagram.

Marie named a racehorse in honor of her late son

She captioned the photo, “A wonderful new friend of mine has racehorses @mcjannet1 and he has given me the most beautiful gift. He has allowed me to name his newest horse. I chose the name Mikhael after my sweet son Michael. The Hebrew spelling of the name Mikhael means who is like God or Godly.”

She continued, “I also found out that the amazingly talented English artist @jacquiejones2 agreed to paint him for me. What an honor!!! What a surprising and incredibly kind gesture to be sending this painting to me. Thank you, Luke and Jacquie!!!”

Many fans loved the tribute to her son. Some of the comments on her post read, “What a beautiful way to remember your child in a beautiful physical form.” Another wrote, “You are truly a sweet person.”

In a recent interview, Marie opened up about life after Michael. She said, “You know, I don’t think you’re ever through it. I think God gives you respites, and then all of a sudden it’ll hit you like the day it did. The ripple effect is so huge, what you leave behind.”

She also revealed in the past that Michael had been bullied and battling depression before he passed. Sending our love to Marie and the family during the holiday season!

Click for next Article
Previous article: Play This Fun Bingo Game While You Watch Live ‘All In The Family’ & ‘Good Times’
Next Post: Superheroes Spend $20,000 Emptying Toy Aisles To Give Hospitalized Children A Merry Christmas