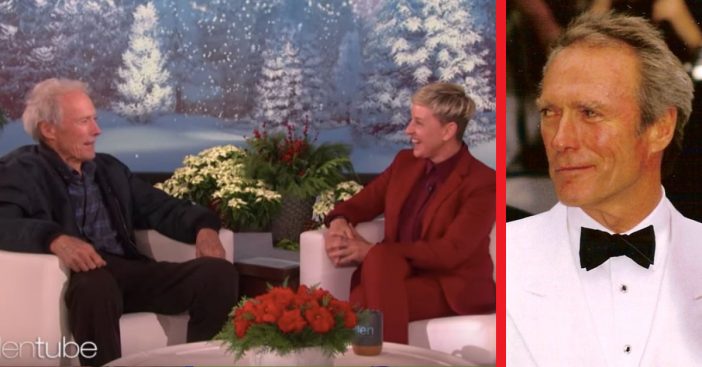 In a segment on Ellen Degeneres’ show, Clint Eastwood talks about eventually turning the big 9-0 in May next year. Despite being 89 years old, Eastwood is still active as ever in the industry. He recently directed the film Richard Jewell and his most recent screen appearance was in last year’s film Mule.

Eastwood jokes with Ellen that he may have forgotten that he’s actually 89. When asked if he cares that he’s turning 90 or getting older in general, he reveals that he really doesn’t. He adds, “I sometimes think, when I was a little kid, and I used to hang out with my grandfather who was in his 90s, and I thought, ‘Jesus, who the h— would want to live this long.’ ”

Clint Eastwood and Ellen Degeneres sit down for a chat

The two are not unfamiliar with each other as they have neighboring offices at Warner Bros. Studios. Ellen was also quick to let her audience members in on some Eastwood work secrets. One of them is the fact that Eastwood lays nuts on his desk for squirrels to come in and eat. Ellen also credits Eastwood for being a great office neighbor, and for that, she rewards him for some nice Christmas decor in his office! She shares a clip of the holiday decor which includes Rudolph the red-nosed reindeer and Frosty the snowman inflatables.

RELATED: The One Thing Clint Eastwood Won’t Tolerate On Set When Directing A Movie

Ellen also begins to talk about Eastwood’s son, who she does a side-by-side with Eastwood when he was his son’s age. The audience erupts with claps and “oooh!”s as the photos show shirtless photos of the two. You can see the expression on Eastwood’s face and he can’t help but blush!

In the same interview, Ellen asks Eastwood about the Warner Bros. fire that took place. Everyone was evacuated and the only one who stuck behind was Eastwood. He was in the process of finishing up some work and was dedicated to getting it done. Nothing stops Clint Eastwood! Take a look at a clip from the interview below.