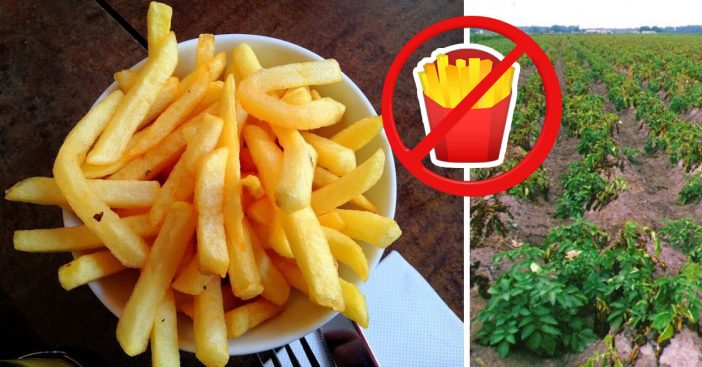 French fry lovers may be in for a rough patch. Unfortunately, this year the potato crops around North America just did not do that well. The cold, wet weather was not great for potatoes and the United States and Canada may start to see French fry shortages because of this.

Many states saw colder weather than normal in October. This meant that frost hit many potatoes and it damaged potato crops around the country, especially in North Dakota, Idaho, and Minnesota. Some states got lots of snow and rain earlier this year, which forced farmers to try to salvage or even ditch lots of potatoes.

In addition, there has been an increased demand for French fries. When you couple these two facts together, it means that potato prices are likely to go up and because of rising International costs, the United States may not be able to export that many potatoes. Supplies just cannot meet demands this year, and likely into next year.

Canada has also been hit pretty hard. According to Yahoo!, “The United Potato Growers of Canada estimates about 12,000 Manitoba acres (about 4,900 hectares), or 18% of the province’s planted area, were left unharvested — equal to what was abandoned for all of Canada last season. About 6.5% of Alberta’s potatoes are estimated to be frost damaged. Manitoba is the country’s second-largest grower, followed by Alberta. Prince Edward Island is No. 1. The government will issue estimates for the nation’s crop on Dec. 6.”

In the United States, the domestic output will drop by about 6.1%. This is the lowest number since 2010. It may fall even further in Idaho, which is the top producer of potatoes in the country. Another issue is that potatoes are coming in smaller this year, due to the weather. Generally, you need large potatoes to make perfect French fries.

What do you think? Are you worried about a French fry shortage? I sure do love French fries! Learn more about this topic below: