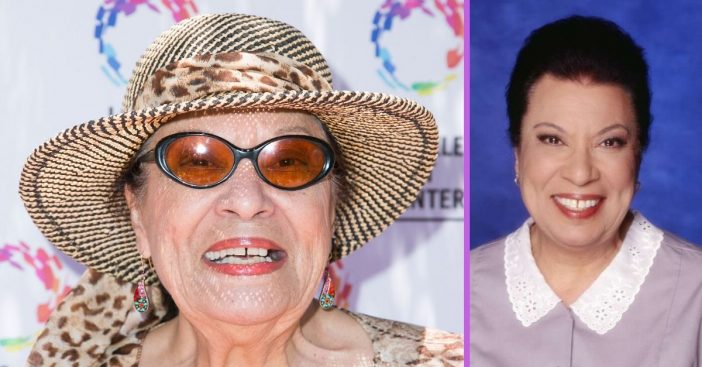 Actress Shelley Morrison has passed away. She was best known for her role as Karen’s (Megan Mullally) maid, Rosario Salazar on the sitcom Will & Grace. Shelley appeared in the series from 1999-2006. She did not appear in the recent episodes, due to being retired from acting.

Shelley died on Sunday at Cedars-Sinai Medical Center in Los Angeles from heart failure after a brief illness, according to PEOPLE.

Her husband, Walter Dominguez released a statement. He said, “Shelley’s greatest pride as an actress was in playing the indomitable Rosario, in a comedy series that furthered the cause of social equity and fairness for LGBTQ people. She also took pride in portraying a strong, loving yet feisty Latina character.”

The statement continued, “She believed that the best way to change hearts and minds was through comedy. The other great joy of her life was her 64-year marriage to her husband, filmmaker Walter Dominguez, and their many family members, including children and grandchildren who were adopted through traditional Native American ceremony.”

Shelley also acted in the ’60s series The Flying Nun with Sally Field. She lent her voice to animated series as well including Handy Manny and Foodfight!. However, she spoke out about Rosario being her favorite character to play. She said, “Rosario is one of my all-time favorite characters. She reminds me a lot of my own mother, who loved animals and children, but she would not suffer fools. It is very significant to me that we were able to show an older, Hispanic woman who is bright and smart and can hold her own.”

Many Will & Grace actors shared their sadness on social media when they found out the news. Eric McCormack (Will) wrote, “Shelley was a beautiful soul & a wonderful actor. Her work as Rosario, season after season, was as nuanced and real as it was hysterical. She will be missed by everyone at #WillandGrace, she’s a huge part of it. Sending so much love to Walter and Shelley’s whole family.”

Debra Messing (Grace) shared, “Oh, Shelley… what a loss. Our dear Rosario has passed on. Shelley had a career that spanned decades, but she will always be our dear Rosie. All my love to Walter and the entire family.”

Megan (Karen) who worked closely with Shelley over the years wrote, “Just got a bulletin on my phone that Shelley Morrison has passed. Putting Shelley, her beloved husband Walter & their children in the light. thank you for your friendship & partnership, shell. you accomplished wonderful things in this world. you will be missed.”

Lastly, Sean Hayes (Jack) shared a photo of Shelley on Instagram and wrote, “Such sad news. Our beloved Shelley Morrison passed away today. She was absolutely hilarious and had the biggest heart. She was a part of our Will and Grace family and will be greatly missed. My heart goes out to her entire family.”

Shelley is survived by her husband Walter, and their six adopted children. In conclusion, check out a clip from Shelley on Will & Grace below: