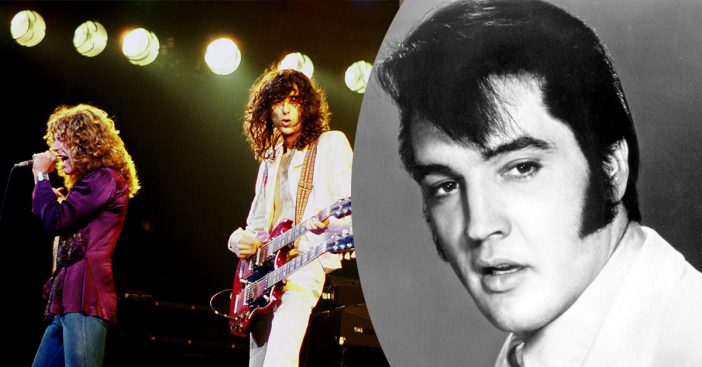 Led Zeppelin once met Elvis Presley and it was pretty bizarre. Sounds like the King of Rock and Roll has his fair share of “bizarre meeting” stories with other bands (i.e. the Beatles infamous meeting with him that was entirely too awkward for words). Led Zeppelin was at the top of the rock charts in the early ’70s and Presley was starting to think that maybe he’s no longer at the top anymore.

According to Stephen Davis’s wild Zep biography Hammer of the Gods, Elvis would tell his entourage, “Well, I may not be Led Zeppelin, but I can still pack ’em in.” This was around 1974.

So, the story begins with Led Zeppelin catching one of Presley’s shows at The Forum during a trip to LA. Presley did see them in the audience and would instruct his own band to play the best that they absolutely can. The two bands also had the same promoter (Jerry Weintraub) so they could have a formal meeting arranged.

However, when Zeppelin finally was able to meet Presley, the King did not look too thrilled to meet them. Elvis would then ask if the stories about the band’s debauchery on tour were true, which is when things started to lighten up a bit. “Of course not!” Robert Plant would chime in. “We’re family men. What I like is to wander the hotel corridors, singing your songs.”

By that point in the conversation, Plant would begin doing his best impression of Presley. He began singing the opening line from the 1956 hit “Love Me.”

“Treat me like a fool,” Plant would start. “Treat me mean and cruel,” Presley responds. Then they both sing, together, “But love me.” This would surely lighten the mood even more and everyone began to socialize and get along well. Presley would follow up with a compliment for the band, saying that he really liked “Stairway to Heaven.” It’s after this point where it starts to get… strange.

The weird part of the night

At a certain point in the evening, Led Zeppelin’s manager Peter Grant would settle into a couch only to realize that he actually sat on Presley’s father by mistake. Beyond this point, there’s not much to report on except that Presley actually got a huge kick out of it. At least no one was mad about it!

Click for next Article
Previous article: The Reason Why Jamie Lee Curtis Doesn’t Dye Her Hair Or Wear Heels Will Empower Women Everywhere
Next Post: Shelley Morrison, Rosario Salazar On ‘Will & Grace’ Dies At 83