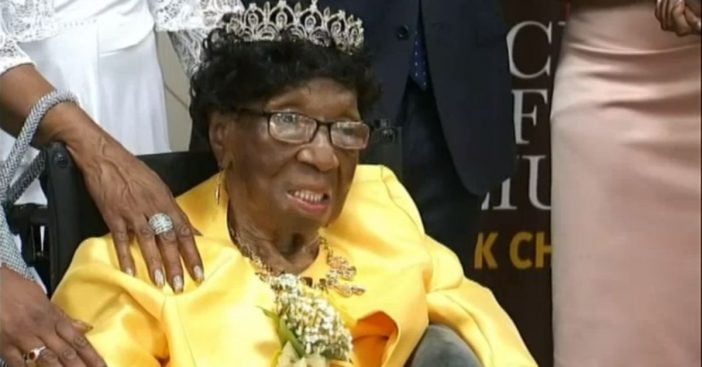 Named the oldest living American, Alelia Murphy of New York has died at age 114. Her granddaughter, Nefer Nekhet, confirmed the sad news. The health care workers’ union 1199SEIU releases a statement on Alelia’s death. They say, “It is with great sadness that we share news of the passing of Mrs. Alelia Murphy. Mrs. Murphy was the oldest living American, having celebrated her 114th birthday in July, surrounded by her family, friends, community leaders, and members of our AFRAM Caucus.”

There is no cause of death at this time. She was exactly 114 years, 140 days when she died. Upon the death of Alelia, the Gerontology Research Group now verifies that Hester Ford of North Carolina is now the oldest living American. Currently, the world’s oldest person is Kane Tanaka of Japan at 116 years old!

Alelia’s 114th birthday was on July 6th this year. Officials in the Harlem section of New York City where she lives declared her birthday “Alelia Murphy Appreciation Day.” She had been living in that exact location since 1926! New York state Sen. Brian Benjamin calls Alelia a “Harlem landmark” and did thank her for her contributions to their community over the years.

Alelia is originally born in North Carolina and moves to New York during the Harlem Renaissance. She had great involvement in her community, especially in the church. These contributions would go on to make her very well-known in her local community, almost like a celebrity.

Alelia was widowed back in 1953 and would support her two children as a seamstress for a majority of her life. Her granddaughter Nekhet says to CNN, “She is the glue that holds this family together.”

While Alelia did not speak at her birthday event, her family says that her secret to longevity was simply crediting God and “being a good person.” Rest in peace, Alelia!

Click for next Article
Previous article: George Harrison Of The Beatles Mortgaged His House Just To See A Movie
Next Post: Get A First Look Inside The First New And Improved Toys R Us Stores