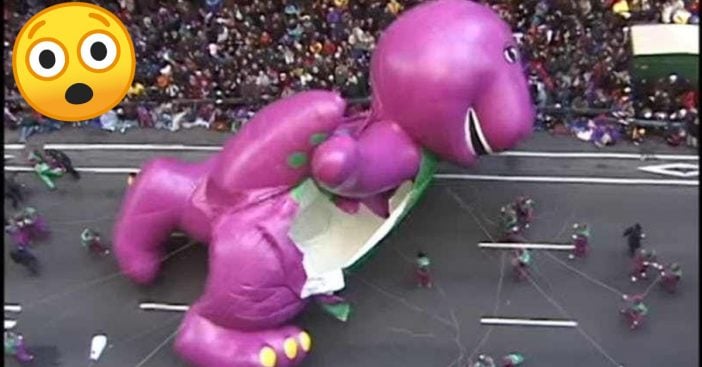 The Macy’s Thanksgiving Day Parade is synonymous with Thanksgiving itself. Since the 1920s, Americans flocked to witness these splendid performances each November. When they became broadcasted each year, televisions around the country showcased the stunning floats and impressive marching routines. Like anything else, though, these parades are not without their share of incidents, especially with the balloons.

Guesses and speculation abound when Americans wonder which floats will appear for the parade. Some floats remain constant while others are variable. Another uncertainty is whether there will be an unfortunate mishap with those floats. 1997 was a particularly eventful year, harboring two major incidents that left a mark on the parades.

I love you, you love me, watch all the air escape from me…

The Macy’s Thanksgiving Parade has a history of close monitoring and shifting regulations. Weather is a key determining factor in how things will play out during the holiday. In 1971, wind speeds reached such high levels that the much-beloved balloons had to be grounded. Over two decades later, a particularly memorable parade made those restrictions even tighter.

It began with Barney, the purple dinosaur endured extensive damage from the buffeting winds. This resulted in a tear that only grew as, down below, Barney’s handlers struggled to keep control of the prehistoric children’s mascot. It was to no avail, however, and Barney’s gash sent the air gushing out of him. He was removed on 51st street.

This mess is so big and so deep and so tall, without all of his air, he surely will fall…

True to his mischievous nature, Dr. Seuss’s Cat in the Hat had to join in on the Macy’s Thanksgiving Parade balloon drama. The cat, however, caused even more trouble for a lot of people. That windy day really impressed on people the need to tightly monitor the weather and make informed decisions to ensure the safety of guests and marchers.

Once again, gusts of wind are to blame for sending the Cat in the Hat balloon careening to the side. There, it caught on a light post, sprung a leak, and knocked off about four feet of the light’s top part. That section, jostled from the collision, immediately fell onto a crowd of pedestrians below. One woman was in a coma for over three weeks because of that. After all these eventful parades, while people await seeing the final lineup in all its glory, they also closely watch the skies, hoping for a calm parade day. Hopefully, this year will be free of Thanksgiving Parade balloon incidents.