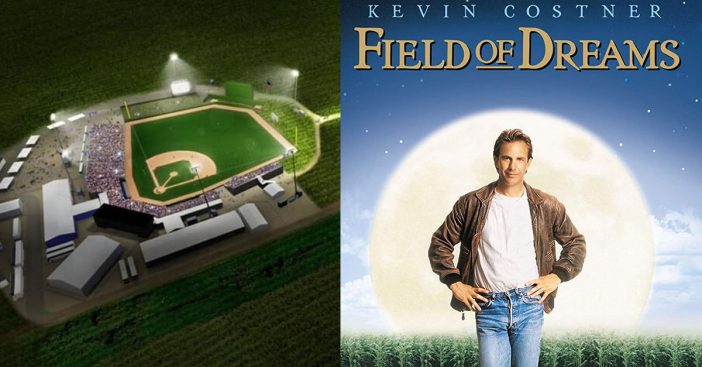 Do you remember the iconic baseball film Field of Dreams? For fans of baseball and the film, your dreams are coming true! Next year, The New York Yankees and the Chicago White Sox will play a game at Dyersville Farm in Iowa. For instance, this is the site of the movie Field of Dreams. They will play on August 13, 2020.

Major League Baseball (MLB) will be creating a temporary stadium for the once in a lifetime event. It will hold about 8,000 fans. CNN has reported that “a pathway through a cornfield will take fans to the ballpark, which will overlook the famous movie location. The right field wall will include windows to show the cornfields beyond the ballpark.”

MLB commissioner Rob Manfred also said, “As a sport that is proud of its history linking generations, Major League Baseball is excited to bring a regular-season game to the site of ‘Field of Dreams.’ We look forward to celebrating the movie’s enduring message of how baseball brings people together at this special cornfield in Iowa.”

Even though the film premiered in 1989, it still remains one of the most popular baseball movies of all time. The land where the game was filmed also remains popular with fans. The land is owned by farmers Don Lansing and Al Ameskamp. For years, Don let fans visit the site for free and sold items in a gift show. Al kept growing corn. In 2012, the land was sold to Go The Distance and they welcome visitors to the site of the movie.

In addition, FOX will televise the game. If you’re interested in going to see the game in Iowa, keep in mind that tickets will likely sell out quickly.

In conclusion, watch these MLB players recite the famous speech from Field of Dreams:

Click for next Article
Previous article: A Dying Man Achieves His Last Wish: To Share A Beer With His Sons
Next Post: Out-Of-Control Balloons In The 1997 Macy’s Thanksgiving Parade