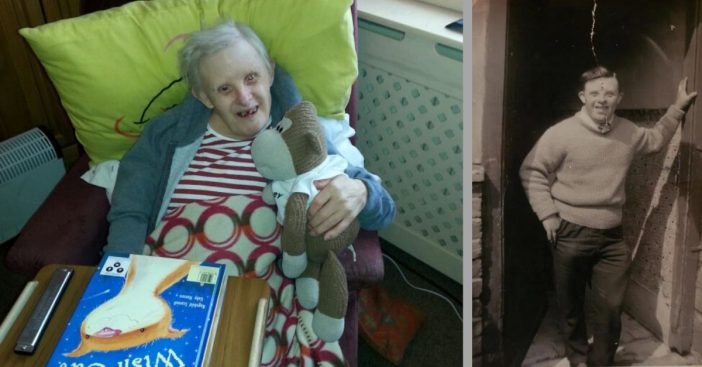 Kenny Cridge, the oldest man in the world with Down Syndrome, celebrated his 79th birthday. Born in 1939 as the twin of his sister Dorothy, Cridge’s condition was not understood by doctors. As a result, he faced an uphill battle early on when doctors said all care should be focused on his sister. Even after Cridge showed strength and vitality, doctors did not expect him to live beyond the age of twelve. This is largely because Down Syndrome was not understood as well as it is today.

Cridge did live passed the age of twelve, however, and outlived his twin, Dorothy. In 2008, he entered the Guinness Book of Records as the oldest living man with Down Syndrome. The Down Syndrome Association cites 50 and 60 years as the average life expectancy of someone with this Syndrome. Outliers exist, but only some are recorded as reaching their 70s. At the Wisteria House care home in Tintinhull, Yepovil, Somerset, Cridge quickly became very popular. Not only does he provide everyone with smiles but he, in turn, receives all the love and care he could want in his old age.

Kenny Cridge faced an uphill battle armed with his own strength

When Kenny Cridge was born, doctors believed he was stillborn. As a result, back in 1939 when he was born, the doctors initially focused entirely on Dorothy. Quickly, though, Cridge turned that assumption around when he began to cry. Even so, in that year the Global Down Syndrome Foundation lists 12 years as the average life expectancy presented by doctors. While those with Down Syndrome are treated better compared to the ’30s and ’40s, it took a lot of determination from many people to get here. Cridge’s niece, Marie Shotton, stated, “Now people with Down’s Syndrome are treated equally and respected, but my nan said that back in the day it wasn’t like that.”

RELATED: Single Dad Adopts Girl With Down Syndrome Who Was Rejected By 20+ Families

His parents Cridge with a lot of love throughout his childhood. Shotton recalled Cridge’s father taking Cridge for rides in the sidecar on his bike. Meanwhile, Cridge’s mother showed she was ready to fight armies for her son. “She fought a lot of battles for him and really devoted her life to Kenny,” Shotton said. Whatever he needed or wanted, she was prepared to provide.

Strength came from without and within

Cridge lived with his mother at Hinton St George, Somerset. There he stayed until she passed away at the age of 90. Following that, he moved to the care home and gained immediate popularity from his sense of humor and kind demeanor. Ann Nicholson, manager at the care home, finds his positivity to be infectious. “Kenny is an absolute joy to be with every day. He’s smiling most of the day – before he goes to bed and when he wakes up he’s smiling.” When not entertaining and inspiring his peers with jokes, he plays his harmonica, enjoys the facility’s food, and reads through the newspaper.

Around the world, more people continue not just to defy the odds, but to redefine them in a way that shows humanity’s unbridled potential. In 2012, the previously oldest man with Down Syndrome was Bert Holbrook from Minnesota. He was 83 when he passed away that year. The oldest living woman with Down Syndrome is believed to be Oklahoma resident Dollie Grissom at age 73. While certain factors are consistent among individuals with Down Syndrome, others continue to be tested by individuals such as these. With such clear support and inner strength, we’re sure Kenny Cridge can continue being, as Nicholson says, a “true gent” and “absolute darling” for many birthdays to come.

RELATED: Couple With Down Syndrome Married For 24 Years Celebrate Their Anniversary

Click for next Article
Previous article: Jimmy Buffett Postpones Concert In Tampa, FL Until 2020 Due To Surgery
Next Post: Subway Releases A Dr. Seuss Inspired Green Eggs And Ham Sandwich