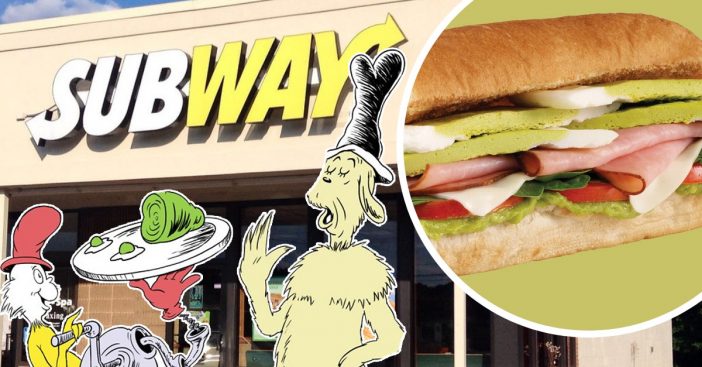 Dr. Seuss first published the book “Green Eggs and Ham” in 1960. It became a classic over the years! Inspired by the new Netflix series with the same name, Subway has released a new sandwich that has ham and eggs with green yolks. As strange as it looks, it certainly sounds delicious if you love ham and eggs.

Sadly, the special sandwich is only available at certain locations in New York City and Los Angeles. The yellows in the egg patties are reportedly dyed green with spinach. A representative said that no artificial dyes were used to create a green look. The sandwich also contains ham, American cheese, guacamole, spinach, and tomatoes on Italian bread.

Subway made a Green Eggs and Ham sandwich

The fast-food chain is also delivering the sandwiches on a Hambulance. The “Hambulance” is an ambulance with a big green ham on the top, inspired by the Dr. Seuss book and the new show. You can see the Hambulance at a pop-up experience in Los Angeles.

RELATED: You Can Now Buy A Dr. Seuss Guide To Art History That Was Never Published

The sandwich at Subway will be available through January 1, 2020, at these participating locations while supplies last. What do you think about a Green Eggs and Ham sandwich at Subway? Would you try it? Learn how to make a similar version at home:

Click for next Article
Previous article: Oldest Man In The World With Down Syndrome Celebrates 79th Birthday
Next Post: With ‘Days Of Our Lives’ Cast Released From Contracts, It Could All Be Ending