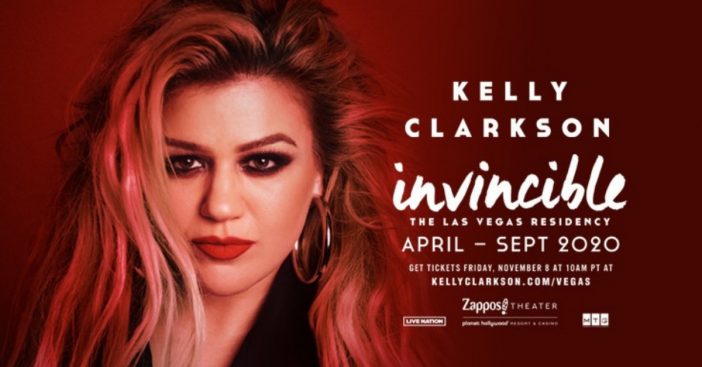 Kelly Clarkson is at it again! In addition to being a coach on The Voice and having her own talk show, she will now have her own Las Vegas residency. The show will be called “Kelly Clarkson: Invincible” and will start in April 2020. As of right now, there are 16 shows scheduled in Las Vegas.

Kelly announced the exciting news on The Kelly Clarkson Show recently. She brought in some Las Vegas showgirls in colorful outfits to make her announcement. Kelly said, “I have a major announcement to make today. I’ve scored my very own residency in Las Vegas. ‘Kelly Clarkson: Invincible’ debuts April 1 — it’s not an April Fools’ joke, but it does debut April 1 at the Zappos Theater at Planet Hollywood Resort and Casino.”

To further celebrate the news, she sang her own songs during the show’s segment of “Kellyoke.” Normally, she covers other songs, but this time she sang a medley of some of her greatest hits. She joked, “I usually don’t like doing (my own songs) during ‘Kellyoke’ because I feel like a tool — but today there’s a reason, so I did it.”

Kelly is excited to spend more time in Las Vegas. She admitted, “Not only am I getting to perform, I’m gonna get to play all the ‘Wheel of Fortune’ slots, which is really my reason for going there. The gambling, the shows, the all-you-can-eat buffet, and crab legs, I love all of it.”

Kelly also gave away tickets to her Las Vegas residency to everyone in the audience during that day’s filming of The Kelly Clarkson Show. They are so lucky!

According to a press release, her show will be “a one-of-a-kind up-close music experience that rocks through her nearly two-decade-long catalog of award-winning smash hits.” As of right now, there are 16 shows scheduled from April to September 2020. Tickets will go on sale starting on November 8, 2019, but there will be a few presale opportunities.

If you’re interested, learn more and purchase tickets here! Check out her announcement on The Kelly Clarkson Show below:

Previous article: Jimmy Carter Shares That He Is “Absolutely And Completely At Ease” With Death While At Church Service
Next Post: Garth Brooks Admits He Can’t Keep Up With Jimmy Carter At Habitat For Humanity