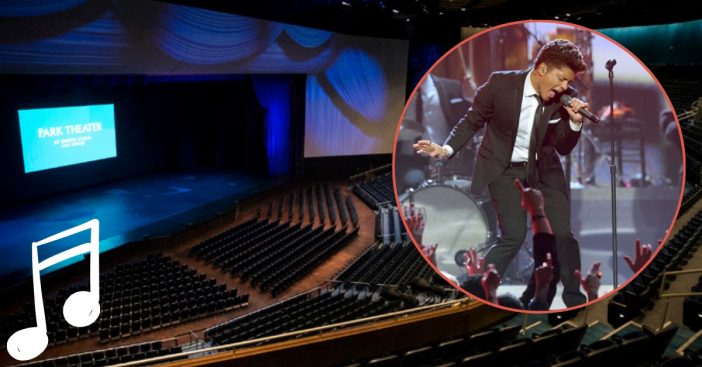 It has officially been announced that Bruno Mars is getting a Las Vegas residency that will span for 11 shows. The shows will run from late April all the way until mid-September, so pack your bags, book your reservations, and get ready for an awesome show! Mars is among the few who have claimed Las Vegas residences over the last several months.

Back in 2013 and 2014, Mars had a Las Vegas residency at the Cosmopolitan. Additionally, his 24K Magic World Tour grossed $370 million, so we’re all expecting this new residency to be a huge hit. Check out the full dates below!

All shows will be taking place at the Park Theater in Las Vegas. Tickets are starting at $99.50, according to the venue website.

The Park Theater is also home to Lady Gaga’s “Enigma” tour, which began on December 28th, 2018. On January 20th, 2019 the Jazz & Piano portion of her tour began, which featured a mix of her own songs and covers of classics such as “Fly Me to the Moon” and “The Lady Is a Tramp” by Frank Sinatra.

Other big artists, such as Cher, are no strangers to the Park Theater either. She will be hosting a multiple-night Las Vegas residency throughout the month of March 2019.

For those who are interested in attending the Bruno Mars Las Vegas residency, general public sale tickets go on sale starting as early as February 8th, 2019, at 10 am PT. Tickets for presales for Ticketmaster, Live Nation, and LN Mobile App will begin on February 6th.

Now, the best part- presale codes. They’re leaked all over the Internet at any given time for just about anyone to access presale with special permissions. The Live Nation / Ticketmaster presale password is CELEBRATE and the LN Mobile App code is COVERT. Be sure to take note of these when ordering tickets. And enjoy the show!

Get ready to see Bruno Mars live in Las Vegas. Be sure to SHARE this awesome news with your friends and family, and be sure to start your packing soon!

Are you as excited about Bruno Mars live as this baby is? Check out the adorable video below of a baby dancing to “Uptown Funk” by Bruno Mars. It is just too cute for words: