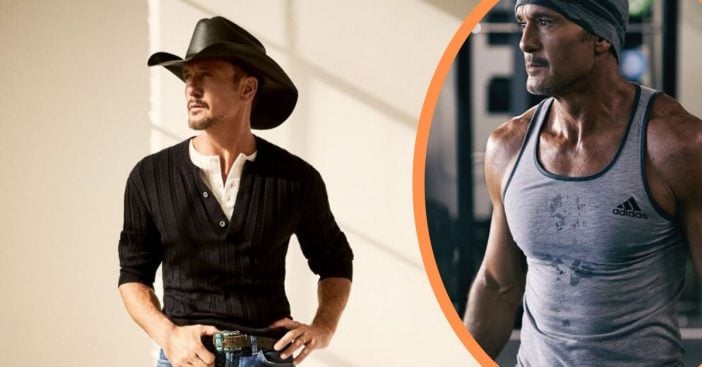 Country superstar Tim McGraw took to Instagram on Sunday to share progress on his fitness journey. The 52-year-old spread a message of positivity and persistence on his post. A strong, healthy build has been his goal all his life, and the music icon is proud to say he can look at himself and feel he succeeded.

The country singer’s passion for a healthy living runs deep. He hopes to encourage others to make choices that will make them their healthiest. His methods of doing so are varied, spanning multiple mediums. Though it is an involved process, his own happiness at his personal fitness is one he wants everyone to experience.

Tim McGraw is a man of many talents

One way McGraw plans on reaching audiences and educating them is through literature. Already he has reached out to them on Instagram. Now, his reach is expanding. McGraw has penned a few of his many catchy country musical numbers. But now he wants to dive fully into writing in a rather surprising way. McGraw told PEOPLE about his plans for a new book for readers to explore. On November 5, Grit & Grace: Train the Mind, Train the Body, Own Your Life is hitting bookstores across the country. Within those pages, McGraw details the journey he himself went through.

Related: How Tim McGraw And Faith Hill Keep Their Love And Marriage Strong After 21 Years

Specifically, McGraw feels the overall transformation he underwent, in no small part through certain lifestyle adjustments, should be a universal experience. Yahoo! reports him voicing the belief that an overall healthier life and relationship with the self and others is “something that is available to anyone who wants it, regardless of their level of fitness.” At the heart of his work, McGraw does not want to instruct readers on any one particular method. Rather, he wants “this book to help people find what works for them by sharing the mental and physical approach that has worked for me.”

The real destination was the journey all along

“I’ve gone through a physical transformation in the last 10 years, but it’s not just my appearance that has changed,” McGraw recalls. A certain few changes ended up having a domino effect on the rest of him. “My mind is clearer, my sense of purpose is sharper, and my relationships are deeper. Consistent physical exercise helps me bring focus to my life and to the people who mean the most to me.”

This fitness quest began as a way to replace a habit he wanted to shake. To relieve his nerves, McGraw drank before most shows. “That’s where my workout program came into play. It took the place of alcohol and it is really important.” The subsequent 40 lbs he lost within two years had been a happy accident. His original intention had been to channel that nervous energy somewhere else, but it ended up providing an example of what happens when something negative is bent to yield a positive. Upon some inward reflection, McGraw feels reaching a personal equilibrium had been the real goal all along. Replacing alcohol with a fitness program was just one step in reaching that inner peace. “For me, it is more about feeling good and being where I want to be physically and on stage,” he states. Hopefully, others will feel inspired too to reach a place where they feel good inside and out.

Previous article: McDonald’s Is Bringing Back Retro Happy Meals Toys To Celebrate 40th Anniversary
Next Post: Joyce Randolph From ‘The Honeymooners’: Then And Now