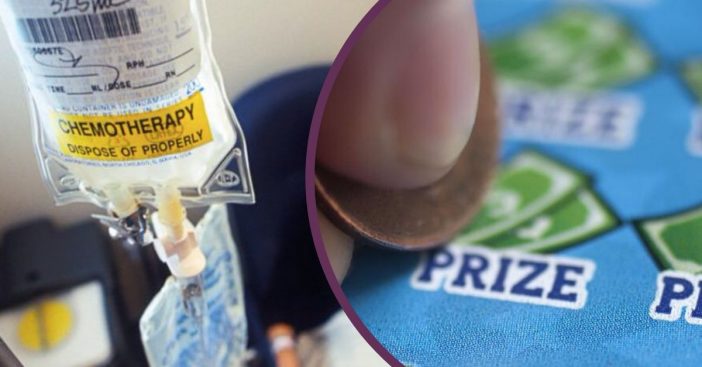 Ronnie Foster from Pink Hill, North Carolina recently won the $200,000 lottery prize while on the way to his final chemo treatment. He says he first purchases a $1 ticket and won $5, so he traded that in 2 more tickets. That’s when his life changed. He didn’t win anything from the first scratch ticket, but then on the second, his luck became real.

“I saw all those zeroes and I froze,” Ronnie tells the lottery. “I didn’t believe it until I gave it to the clerk at the counter to scan. When it showed, ‘Go to lottery headquarters,’ I started shaking. I couldn’t believe it.”

Ronnie is a retired Department of Transportation. He was diagnosed with colon cancer and is now nearing the end of his treatment. With it being the last day of his chemotherapy treatment, a day that most people would be so excited over, this lotto win made it an even better day!

“I was already happy because it was my last round of chemo,” Ronnie says. “Winning this made it my lucky day.”

Ronnie says that while he does have medical insurance, a portion of this money will go towards paying off some of the treatment costs that weren’t covered. He says that the rest will be saved “for the future.” After taxes, Ronnie would take home $141,501, which is still not bad! The lottery reports that sales raise over $700 million a year. This goes towards supporting education programs across the state of NC.

This truly could not have come at a better time in Ronnie’s life. We’re all so happy for him!

Eddie Van Halen Says “Cancer Can’t Slow Me Down” As He Continues Living His Rockstar Life.