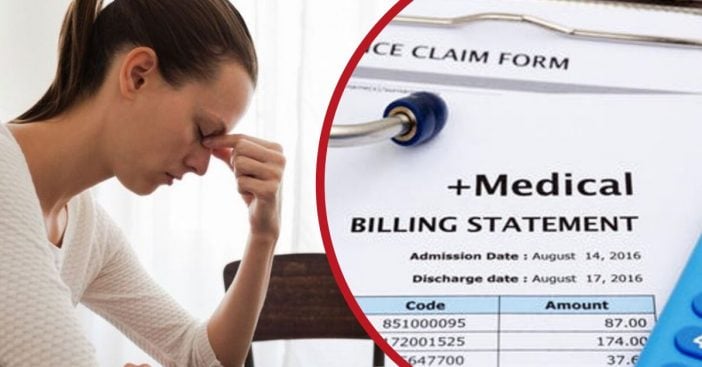 Medical bill debt can throw anyone into a seriously vicious cycle of a recurring nightmare. This happened to Joclyn Krevat back in March 2011 when she receives a peculiar LinkedIn request. It was a debt collector. Back in 2009, Krevat was hospitalized with giant cell myocarditis, a severe inflammatory heart disease that can lead to heart failure.

Subsequently, she was on life support for 7 weeks until they found an available heart, and she had a transplant. As a result, she became riddled with medical bills totaling up to $50,000.

Now, back to the LinkedIn request. The reason this is weird is that the request came with the usual message, “I’d like to add you to my professional network.” However, Krevat knew there was no way this debt collector wanted to actually be in each other’s professional networks. The debt collector’s request is an extreme case of what can happen when medical bills go unpaid.

The Atlantic states that about 43 million Americans have unpaid medical debt on their credit report. Additionally, about 1 in 6 Americans received a surprise out-of-network medical bill in 2017 after receiving hospital treatment. And this is when they had insurance!

So many invoices… so little time…

Krevat begins receiving individual invoices for various different pay ranges. One was for $9,000 for one of the hospital doctors. Another was for $17,418 for another doctor. And the third was for a whopping $22,464 from Weill Cornell Physicians. They all came at different periods of time as well. Columbia University Irving Medical Center releases a statement on why this occurs.

“Unfortunately, when a patient’s insurance plan does not cover all of the costs involved in their care, the patient is responsible for the balance. We understand that unusually high health-care costs may create a financial hardship for other patients and we try to set up payment arrangements that are within their financial means.”

Never-ending hours of negotiating and disputing

Krevat disputes this, saying that she should have been covered for these bills because she was unconscious at the time of receiving them. “I was never in a position to preselect who can perform my heart transplant,” she shares with The Atlantic.

This would lead to Krevat making a lengthy Excel spreadsheet, documenting notes on her phone calls with customer service reps and much more. She becomes worried about how this will affect her credit score and if it will start docking her husband’s wages. Sadly, the LinkedIn debt collector is not the only one who tries to contact Krevat. As a result, she tries to come up with $15,000 for these various groups. Collectors would continue to call several times a week for more than a year.

A Happy Ending… or is it?

Craig Antico, a former medical-debt collector and a co-founder of RIP Medical Debt says “Debt never dies.” And how true is that? Debt collectors will virtually never stop calling you to remind you about your debt and the fact that you need to repay it. Sometimes, collectors may even try to sue you. Of course, in the case that you believe some medical debt is wrongfully garnered, you can dispute it with your credit bureau.

In the end, Krevat did not pay the $50,000. After negotiating her debt with KP Recovery Solutions, she got that down to $4,500. A huge drop! Hilariously, Krevat gets an email from the same LinkedIn debt collector two years after her hospital stay. They were trying to get her to pay a new $780 bill for a doctor’s visit that had never happened. “I will not pay for something that did not happen,” Krevat writes back. She never hears from the debt collector again.

Do you have any medical debt horror stories? We can’t believe the lengths that debt collectors will go to!

These Bizarre Medical Treatments From The Past Show Medical Knowledge Has Come a Long Way.