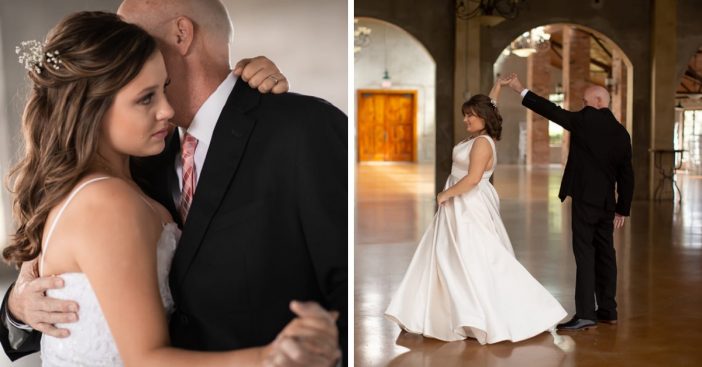 This month, two daughters got to have a very special day with their dad. Sadly, they recently found out that their father was diagnosed with an aggressive form of cancer and only has months to live. When asked what they want to do, both wanted to have a wedding first dance and photoshoot with their dad.

Kaylee and Ashlee Halbert picked out their first dance songs with their dad Jason. They shared their story on Facebook and asked for help. The community banded together and provided the girls with donated wedding dresses, a videographer, and a photographer.

Nicole, the girl’s mother, and Jason’s wife said, “We were lucky because a lot of kids lose their parents suddenly and aren’t able to recreate a memory. We were lucky that we knew. It was wonderful. It was really the community that pulled together to make it happen for us. [It] was just a little request that my girls had.”

The photoshoot was held at Olde Dobbin Station in Montgomery, Texas. In addition, the venue donated the use of their facilities for the entire day. The family hopes to spread the message to “find joy in the journey.”

Jason was diagnosed with an aggressive type of brain cancer and now the cancer has spread. He was recently diagnosed with leptomeningeal disease as well. Nicole said she wasn’t sure at first if this was the right thing to do, but knew it was when she saw them dancing.

She continued, “I was so proud of him because he fought through feeling miserable to do this for them. He was not going to get to see them in a wedding gown or in that moment. So now he has kind of that image. So, it was important for him to be able to know that that’s what it could be.”

They hope they can inspire other families to do the same thing if they are in a similar situation. Now, they have memories for a lifetime. The women also plan to get matching tattoos. The tattoos will be a sound wave of Jason saying “I love you girls.” He has also been writing letters for them to open on special days in their lives, including their actual wedding days.

Bride Requests Photoshoot With Dying Father Instead Of Engagement Photos