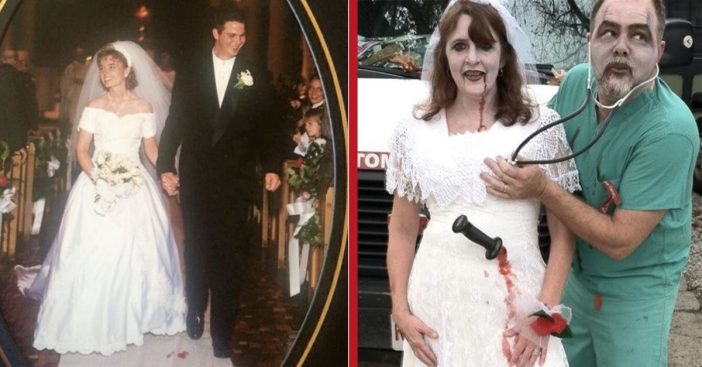 Wedding dresses obviously mark a very special occasion in someone’s life. However, they’re typically only worn one time; for a wedding! A couple of brides found the best way to repurpose their wedding dresses for Halloween over the years and the photos are just too good.

Leighanne Hustak is one of them. She and her husband have been together for 20 years. And to mark their 20th anniversary on October 11th, 2017, they decide to celebrate their relationship milestone in an incredibly funny and creative way.

Breaking in the wedding gowns (again!)

Hustak explains, “Every year, we go to a local Halloween party with some other couples and are always looking for a unique couples costume idea. As our anniversary was approaching, I was feeling sentimental. My wedding dress had been preserved in a special box and I had not opened it since 1997.”

That’s when Hustak decides to repurpose her wedding gown for a “Phantom of the Opera” themed Halloween costume with her husband! It was the perfect costume, and she and her husband look amazing!

Mary Grace Nichol is another. She got married in 2004 and it wasn’t until 2014 when she stepped right back in it for a Halloween costume. “It actually fit better since I had recently become a Weight Watchers member and had lost 40 pounds. The skirt needed to be taken in three sizes. I felt great being able to wear such a beautiful dress again,” she says.

The couple that dresses up for Halloween together, stays together

Lastly, Cindy Richard Sattal begins wearing her wedding dress for Halloween costumes in 2007 after marrying her husband Thomas in 2001. The couple buys a house that looks like it’s haunted, so what better way to celebrate the spooky season than to throw a festive Halloween bash?

Sattal goes as a dead bride every year, but changes it up. “The kids loved it. They also loved the boy mannequin we would dress up and keep in our stairway window year-round. My dad also built us a coffin for the front yard. We would take turns laying in it to scare the children and, more often than not, the adults as well,” she explains. Definitely getting into the spooky spirit!

Isn’t this such a great way to repurpose an old dress?

Donated Wedding Dresses Are Being Made Into Angel Gowns For Families Who Lost Babies.

Previous article: Actress Molly McCook From ‘Last Man Standing’ Got Married!
Next Post: This Magical ‘Wizard Of Oz’ Airbnb Is Only $35/Night