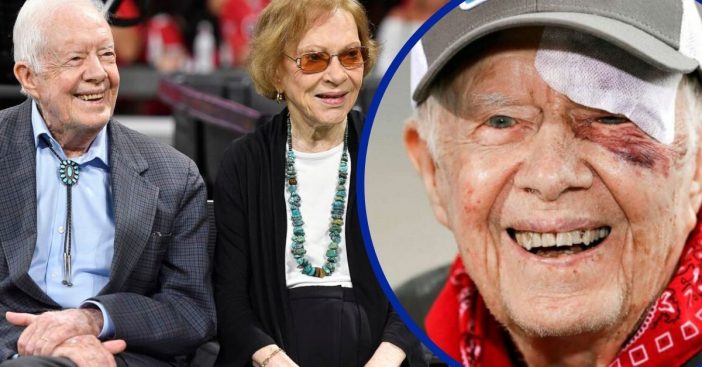 We recently reported that former U.S. President Jimmy Carter had taken another fall at his Georgia home. It was his second fall in a month, his third this year. He was hospitalized for treatment on a minor pelvic fracture and is now recovering at home. An official statement update was posted on their Twitter account.

“Former U.S. President Jimmy Carter has been released from Phoebe Sumter Medical Center. He is looking forward to continuing to recuperate at his home in Plains, Georgia,” the tweet says. “Thanks, everyone, for their kind well wishes.”

Former U.S. President Jimmy Carter has been released from Phoebe Sumter Medical Center. He is looking forward to continuing to recuperate at his home in Plains, Georgia, and thanks everyone for their kind well wishes.

Earlier this month, the former president took a fall that resulted in 14 stitches in his head and a black eye. However, even after this incident, he still made his way over to Habitat for Humanity to build homes for the less fortunate. Photos show the 95-year-old working away with an obvious black eye. He didn’t care about his own misfortunes and wanted to be there to help.

However, earlier this year would be the first of the falls which caused him to break his hip. He needed surgery for it and would need to take some time off and recover. Carter seems to be powering through all these falls, but many fans and followers of him are concerned.

“I hope he heals well. He needs to let others carry on his work. My love to humanitarian/President Jimmy Carter,” someone writes in response to the Carter Center’s tweet. Another person says “Dear Jimmy, please wait a little bit before doing your favorite rambunctious happy dance on the roof of your house. Take care of yourself, the world needs your wisdom. Love you more than words can say.”

We certainly hope that Carter is resting and recovering well. He deserves some much-needed time off from his favorite activities!

Jimmy Carter Talks About Volunteering For Habitat For Humanity at 95 Years Old!