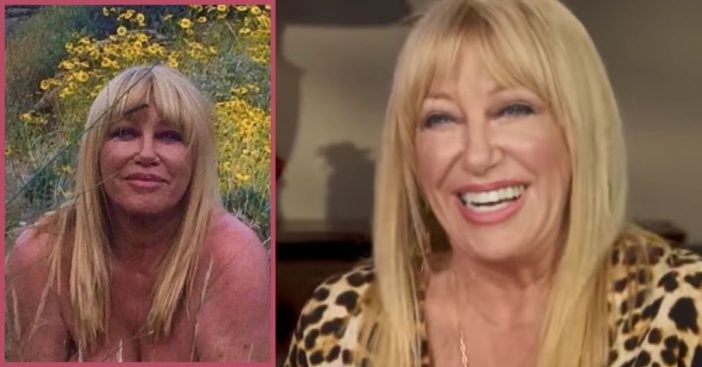 We reported that 73-year-old Suzanne Somers had posted a racy nude photo in light of her birthday. The photo was met with tons of backlash, as in the photo she squats completely naked in a field of tall flowers and grass. The photo was actually pretty similar to the photo she posted a while back of herself in an outdoor bathtub.

In this birthday photo, she’s covering up her chest but still bares all. After the backlash, Somers has responded to the criticism. Many call it “totally inappropriate,” but she says that’s “too darn bad.”

In an interview, she has something to say to all the haters who put her down for this ‘birthday suit’ photo. Suzanne Somers responds, “When you’re 73 years old and you want to take your clothes off, you don’t like it, too darn bad,” she says in the interview. She laughs afterward, seeming to make light of the situation and not caring too much about what others have to say.

Many of the comments read, “Why would she do that!?” or “Not a pretty sight.” However, a lot of positive comments were shared on the photo as well. Some people say, “You go girl! Way to rock your 70’s. So inspirational!!” Another says, “Happy naked SUZANNE day! 🎂☀️🌻❤️”

All of these racy photos are taken by her husband, Alan Hamel, whom she’s been married to since 1977. Check out the video below where she talks about what she has to say to any social media haters! We applaud her for sticking up for herself and being confident in her own skin.

We recently made a 1970’s Top 10 Beautiful Bombshell video – check it out and see if Suzanne made the cut!

Previous article: First Look At Dolly Parton’s New Netflix Series ‘Heartstrings’
Next Post: The Danger Of Keyless Cars: What You Need To Know