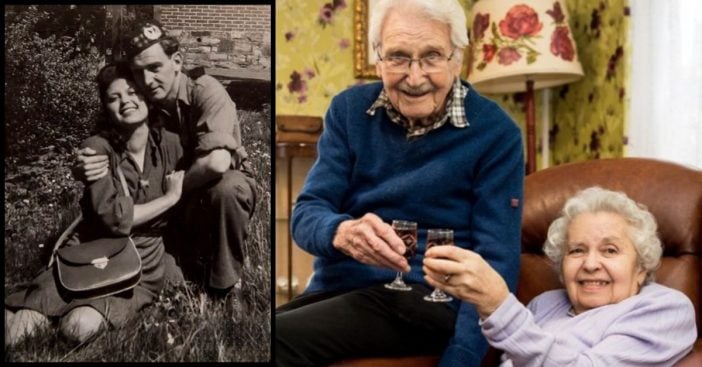 23-year-old John Mackay and 20-year-old Edith Steiner survived one of the worst time periods in history. In fact, John actually would end up saving Edith from Auschwitz in 1944, but at the time, they had no idea they’d end up together forever! John originally escaped from an Italian prisoner of war camp in Tobruk, Libya. He was part of a Scottish commando unit that liberated Edith and others from the Jewish concentration camps.

Edith and many others were are the camp at the same time as Josef Mengele. He was known as The Angel of Death. He was an SS officer and physician known for his cold-blooded experiments. Edith would lose 39 family members during the World War II Holocaust.

The two celebrated accordingly after getting out and noted that there was a dance going on. John actually asked a friend of his to ask Edith to dance with him, to which she obviously said ‘yes’! But, only on the condition that John asked Edith himself. He really had to man up and be brave! So, he would muster up the courage to ask Edith to dance. The rest truly is history!

The two would end up marrying on July 17th, 1946. They would go back to Scotland, and after owning the Atholl Arms Hotel in Pitlochry, they would retire to Dundee. They have two children together, named Sharon and Peter.

Edith passes away just a few weeks before their 73rd anniversary

The couple was originally covered back in 2017 when they were celebrating their 71st Valentine’s Day together! Sadly, Edith would pass away at the age of 92 just a few weeks before their 73rd anniversary together. John was right by her side through it all. While it’s sad that she passed away, she did live a very long and eventful life with John by her side through all of it!

People all over the world have had such positive reactions to this couple. One person says, “No doubt about the sincerity of loving and caring hearts who have done the right things. They deserve every blessing that comes their way.” Another says, “Great example of 2 people surviving disaster together and remaining committed to one another in love. Wish we could all have lifetime marriages.”

Holocaust Survivor Reunites With Family 73 Years After They Hid Her From Nazis.

Click for next Article
Previous article: Pink ‘Piglet’ Puppy Is Teaching Kids It’s OK To Be Different
Next Post: Five Celebrities Who Have Flawlessly Transitioned To Gray Hair