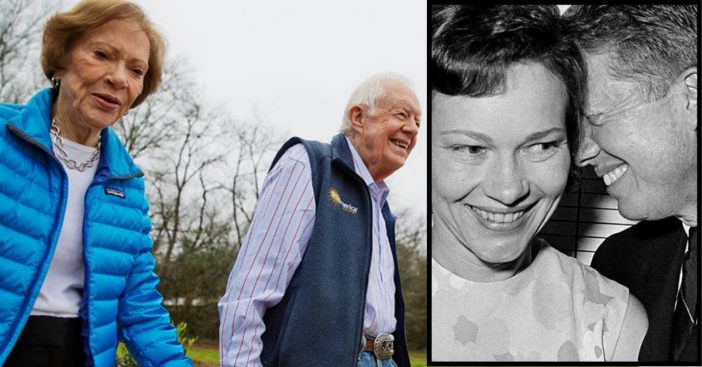 Former president Jimmy Carter and his wife, Rosalynn, are celebrating their 73rd wedding anniversary! How incredible! Jimmy, 94, and Rosalynn, 91, have been married since 1946  at Plains Methodist Church in their hometown. Since marrying, they’ve been able to live in the Georgia Governor’s Mansion and the White House.

The two have done amazing things together. In 1982, they both founded the Carter Center in 1982. The goal is to advance peace and improve health worldwide. Then, in 1999, then-president Bill Clinton awards the two with the Presidential Medal of Freedom. “Jimmy and Rosalynn Carter have done more good things for more people in more places than any other couple on the face of the Earth,” Clinton said of the couple.

Other milestones and accomplishments the two receive together

Jimmy was also awarded the Nobel Peace Prize in 2002. He won the award “for his decades of untiring effort to find peaceful solutions to international conflicts, to advance democracy and human rights, and to promote economic and social development.”

Rosalynn has also spoken at the annual Rosalynn Carter Georgia Mental Health Forum. Just last year, she says she has been a mental health advocate for 48 years and plans to make it a full 50!

The beautiful couple has also managed to build a beautiful family over the years. They have gorgeous children, sons Jack, James and Donnel; and daughter Amy. They have also built thousands upon thousands of homes for needy families via Habitat for Humanity.

However, the two truly didn’t believe they would ever reach a milestone in their wedding anniversary passing 70 years. In 2015, doctors discover cancer in Jimmy’s liver and brain. “We thought life was over for me. I think that having been together for 69 years obviously made it easier for us to weather that storm of emotions,” Jimmy reveals.

Thankfully, later scans showed that Jimmy’s body was no longer harboring any more cancer. He and his wife are now at the 73-year mark for their marriage, which is much longer than they originally anticipated. So beautiful!

To this day, Jimmy still remembers this little fact that keeps him persistent. His first marriage proposal to Rosalynn earned him a “no.” But he kept trying, and she eventually said yes! The rest is history.

We wish these lovebirds a very happy 73rd wedding anniversary and hopefully many more!

Did you know that Jimmy Carter and his wife, Rosalynn, still live in the same Georgia house he built before he became president? Take a look at the photos!

Previous article: David Cassidy’s Family Reveals The Last-Minute Change To His Will That Stunned Everyone
Next Post: Twelve Heartwarming Moments When People Went Out Of Their Way For Others