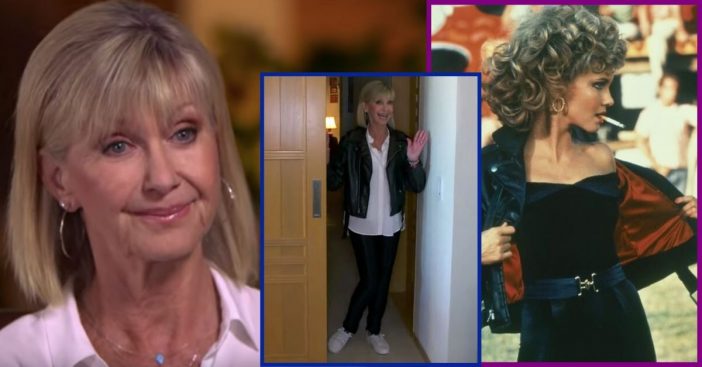 Olivia Newton-John was 28 years old when she slipped into an iconic Grease costume for “bad Sandy” in the 1978 hit movie. Now, at 71 years old, the outfit still fits her! She has slipped into the same outfit once again.

“They live again! They live again!” Newton-John exclaims as she emerges in the leather pants and jacket. This occurs during her interview with Gayle King on CBS Sunday Morning. Prior to even putting on the pants, she reveals that she actually had to be stitched into the pants every time she put them on. Can you believe that?!

“I was a pretty skinny girl and they were the perfect fit for me except the zip was broken, so they would stitch me into them,” Newton-John reveals. She laughs while recalling that she would try her best not to go to the bathroom while wearing those same pants.

This is one of the many costumes that the actress is planning to auction off for charity. A portion of the proceeds will be going towards her Olivia Newton-John Cancer Wellness and Research Center in Melbourne, Australia. She founded the wellness and research center during her own ongoing battle with breast cancer, which she is now fighting for the third time. She tells Gayle that the pain can sometimes be “really bad.”

How she stays so positive amid cancer battle

“Crying pain, tears pain,” Newton-John explains. She also shows Gayle the marijuana plants she’s been growing to help combat that pain. She’s been very open about her use of medical cannabis during her cancer battle. Despite everything, she manages to keep a positive outlook on life. “In my opinion, if they give you a percentage, or you know, ‘This many women get this and they live this long,’ you can create that and make it happen,” Newton-John explains.

“It’s almost like — I think I know what the statistics are. And if, and, but I put them away. But I’m gonna live longer than that. I’ve made that decision. And I don’t buy into the statistics ‘cause I think they can make you really nervous,” she says.

Newton-John goes as far to joke that “denial is really healthy.” She elaborates, “It was consuming by day, and after some time I went, ‘You know what? I don’t know what my time is, but I need to enjoy my life, so I’m gonna eat a cookie if I want it and I’m gonna have a cup of tea if I want it, and I want to have a little bit of wine then I’m gonna do that.’“

Check out the full interview with Gayle King on CBS Sunday Morning below.