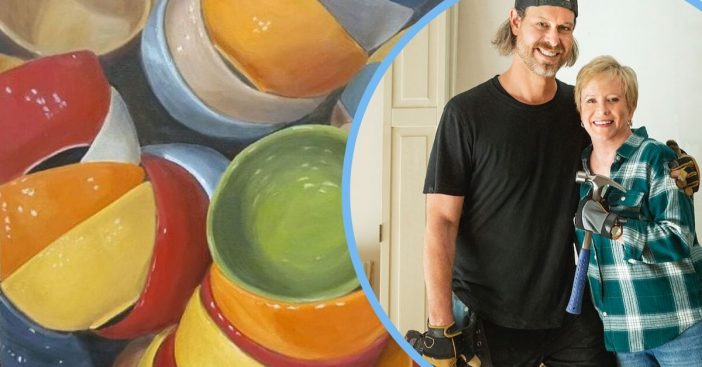 Actress Eve Plumb, who is known for her role as Jan Brady on The Brady Bunch, has been seen a lot recently with her co-stars for A Very Brady Renovation. In its third episode, “Orange You Glad It’s Avocado?”, Eve helps the brother-and-sister duo Leanne and Steve Ford of Restored by the Fords in recreating the familiar kitchen she grew up on. She lends a helping hand with a painting skill she has!

Eve would continue acting after The Brady Bunch finally ended and along the way she discovers that she has a passion for painting. She talks to HGTV about the hidden passion.

Eve Plumb is an extremely talented painter … See Her Work!

“I started painting because I needed something to do in between jobs,” Eve tells HGTV. “I just kept at it and asking other artists until I liked it well enough to put it up on the wall.” It evidently ended up working out for her! She is a brilliantly talented painter.

She works out of her New York City apartment that she shares with her husband, Ken Pace. Eve has more than two decades of painting under her belt and she’s only getting better! She has also had her work featured in various galleries. Eve mainly focuses on still-life paintings of everyday objects.

An overview of Eve’s work includes a mix of fruits catching the light, snapshots of restaurant seats and food condiments on checkered tables, and those memorable Fishs Eddy bowls. Eve has also expanded her prowess and has tried out painting scenes from classic Film Noir and Western movies.

In the newest episode of A Very Brady Renovation, the talented painter works alongside Leanne Ford. They’re trying to find the exact green paint color used for the chairs. This would complete the original Brady orange and green decor.

She wants people to enjoy her work

This will be the first episode centering around Eve, so it’s super exciting for all of us fans! However, in the 2nd episode, we were already able to see a glimpse of her amazing artwork. She painted a replica of one of the artworks originally displayed in the girls’ bedroom. She signs them “Jan B.”

“I don’t want to hold onto them,” Eve says to HGTV about her finished artwork. “I want people to enjoy them. It’s always such a thrill when someone buys a painting and wants to have it in their house.”

Eve Plumb From ‘The Brady Bunch’ Didn’t Have Kids Because She “Never Wanted To Be A Mom”.

Click for next Article
Previous article: Retired Patrolman Derrick Bishop Dies Of 9/11-Related Cancer
Next Post: World War II Veteran Requests 100 Cards For 100th Birthday — He Got Much More Than That!