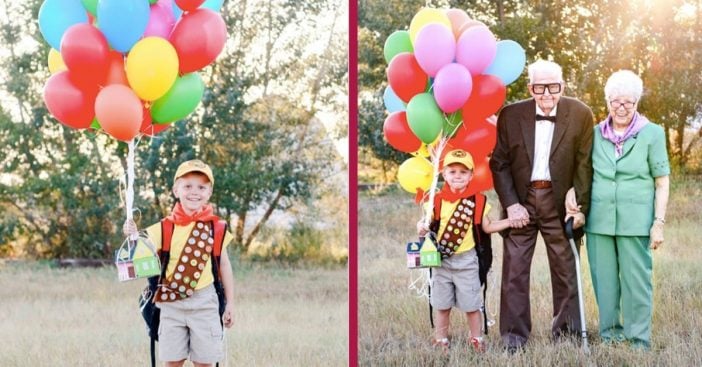 Rachel Perman gave permission to her son to have a photoshoot for his fifth birthday and he had the best idea. For his photo shoot, he gains inspiration from his favorite Disney movie Up. The 5-year-old, Elijah, had his 90-year-old great grandparents join in on the photo shoot. They all dressed up like the characters from the film!

“I decided this year that I was going to do fun thematic photo sessions with each of my kids for their birthdays! The twins were up first! UP themed session for Elijah with his 90-yr-old great grandparents as Carl and Ellie, and a unicorn/princess session for my daughter Emilee! The magic is real with these!” Rachel posts on her business Facebook page.

This ‘Up’ inspired photoshoot is way too adorable!

Rachel is a part-time photographer and took these photos herself. After posting them, they soon went viral and have garnered nearly 1,000 Facebook reacts and almost 400 shares. We’re sure it’ll continue making the rounds on the Internet!

Why the mom decides to post personal photos of her family

Rachel explains that she doesn’t normally post personal photos on her business Facebook page, but she obviously couldn’t resist showing these off! We can see why. She tells CBS why she decides to ultimately post photos from the Up inspired photoshoot.

“Five years ago, I was diagnosed with cancer right after my twins were born, and had fears if I would even get to see their fifth birthday,” Rachel confesses. “My oldest was 5 at the time and I hated not knowing if I would get the same time with them that I got with her.”

An Exciting Time For Family

In conclusion, Rachel’s cancer is now in remission and obviously made it to her twins’ 5th birthday(s)! Rachel wanted to celebrate in a big and exciting way, as did her son. “It’s a celebration for me and them!” she happily says. To view all the photos in the album, head on over to her Facebook page. They’re just too adorable to pass up!

This Up inspired photoshoot is so adorable and heartwarming!

Take a look at these 12 heartwarming moments when people went out of their way for others!