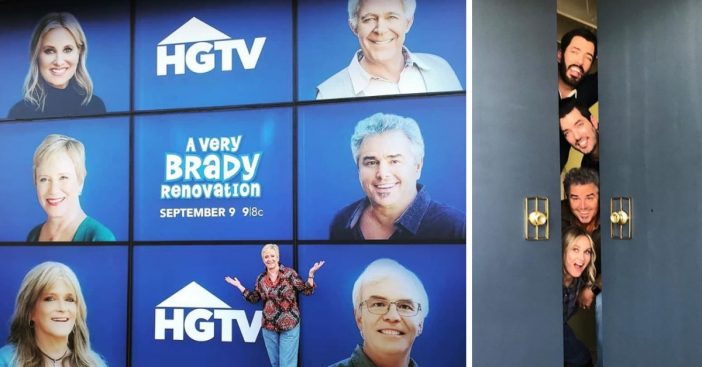 There was recently the first screening for A Very Brady Renovation. For the rest of us, the show premieres on HGTV on September 9, 2019. It is set to air in five segments. The first one will be “super-sized,” three episodes will be an hour, and there will be a holiday special.

Learn more about “the happy accident”

According to TV Insider, Loren Ruch, senior vice president, HGTV programming and partnerships, and Jane Latman, president, HGTV, opened up about some surprises fans might expect on the show. They said “it was a completely happy accident” that the Brady kids actually had some renovation skills.

For instance, “It turned out to be this incredibly happy accident that they were much more skilled than we thought. And more than skilled, they were just interested in participating. We didn’t expect them to be experts.”

The completely renovated home now looks exactly like the television home on the inside. Previously, the home was only the exterior of the house on The Brady Bunch. The home has been appraised for $3.9 million.

The appraisal excludes some furnishings that are custom or authentic. Some of the items were actually from the show! In addition, Paramount let HGTV use them as they had just been in storage all of these years.

The cast worked very well together on the renovation

Rush also said, “They were amazing partners. I mean they’d send stuff to the secondary warehouse and a lot of the items featured in the [renovation] were either featured in the show and or one of the Brady Bunch movies. And they gave us the opportunity to embellish or fix or change them and so I honestly couldn’t have done the show without them. We had the rainiest winter in history in Los Angeles. So that created a whole other layer of drama.”

We are so excited to watch A Very Brady Renovation! The special premieres on HGTV on Monday, September 9th at 9 pm.

In conclusion, check out a very special sneak peek below:

Lastly, learn more about behind the scenes of the show here!