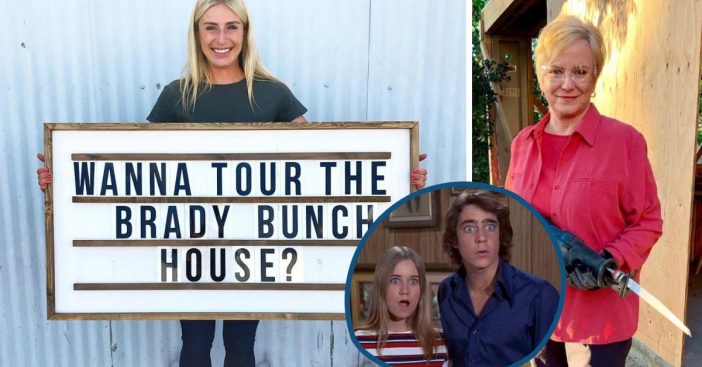 The mini-series will premiere sometime in September on HGTV, but for now, we love looking at spoilers! Jasmine Roth, who has a show called Hidden Potential on HGTV, has been working with the Brady Bunch on the new renovation.

Jasmine is spilling some secrets from the set

Jasmine has been working with Property Brothers Jonathan and Drew Scott, Mina Starsiak and Karen E. Laine from Good Bones, Leanne and Steve Ford from Restored by the Fords, and Lara Spencer from Flea Market Flip.

They are joined by Barry Williams (Greg), Maureen McCormick (Marcia), Christopher Knight (Peter), Eve Plumb (Jan), Mike Lookinland (Bobby), and Susan Olsen (Cindy). So, have the Brady siblings actually been helping or does that just look good on television?

Jasmine said that they have been really involved! Mike Lookinland actually works in construction, so he has probably been the most helpful. He owns a concrete company in Utah, so his skills have likely been very crucial during the restoration.

That is not the only thing that Jasmine says the Brady kids have been very helpful with.

She said they have memories that help them create the look of the home that will appear just like the Brady Bunch set. Pictures and videos from the show can only do so much, so their memories from working on the set every day for years is very valuable.

What was the most challenging part of the restoration so far?

Jasmine said that the logistics of creating the set inside the home and keeping the outside the same has been challenging. They had to add that iconic staircase, which was no easy feat!

They also had to add those Jack-and-Jill bedrooms with the bathroom between them. If they added them on the second floor, it wouldn’t look right, so they had to dig down. It sounds like quite the project, but it will be totally worth it to see the incredible results!

What is one thing they had to add to make it liveable?

In The Brady Bunch, you never see a toilet. So, the set didn’t actually have toilets in the house. Of course, they had to add those to make it a real, liveable house, not just a television set.

They did, however, purposely not add some things from the ’70s. Since you could never see the ceilings on set, they chose not to use the popcorn ceilings that are so out of date.

The home renovations should be completed by the end of May. Several weeks ago, they kicked out the Brady kids so they could finish up the home and they would be surprised by the reveal! How cool is that?

After the show airs, what will HGTV do with the home? Surely, it won’t just sit there. No one knows for sure yet, but Jasmine said there have been lots of rumors and talk about letting people spend the night there. That would be so awesome! Would you like to spend the night in the newly renovated Brady house?

If you enjoyed this update on A Very Brady Renovation, please SHARE with your friends who are excited about the new show too!

Check out this clip of Maureen McCormick and Jasmine Roth knocking down walls: