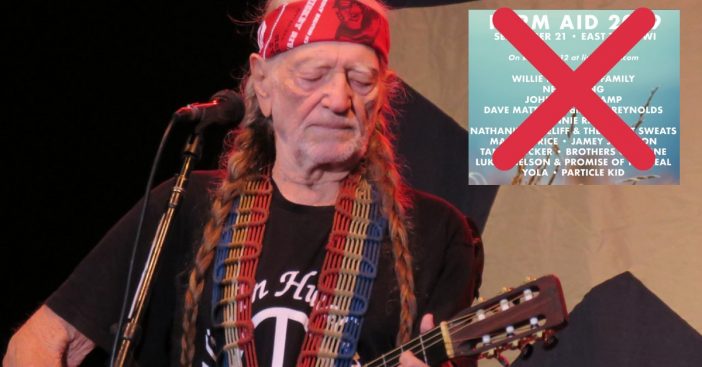 Singer Willie Nelson recently canceled his upcoming tour. He is 85 years old and was set to tour the country, starting this weekend in Grand Rapids, Michigan. Willie was also set to perform at the Outlaw Music Festival and at Farm Aid. This isn’t the first time either. Last year he had to cancel his tour for the same reason.

He is experiencing breathing issues, which make it too difficult to perform. Willie is known for being an advocate of smoking weed, and even during his breathing problems, he said he will not quit. He is actually the chief tester at his own weed company called Willie’s Reserve.

Willie took to Twitter to explain his reasons for canceling the tour dates. He wrote, “To my fans,
I’m sorry to cancel my tour, but I have a breathing problem that I need to have my doctor check out. I’ll be back. Love, Willie” Such disappointing news, but he has to put his health first!

To my fans,
I’m sorry to cancel my tour, but I have a breathing problem that I need to have my doctor check out.
I’ll be back
Love,
Willie

Two years ago, Willie ended a concert early due to shortness of breath. It was in Salt Lake City and doctors said it was because of the venue’s high elevation. Fans have been commented on his Twitter post wishing him a speedy recovery. Many hope that he can come back stronger than ever to perform.

Here at DYR, we all hope that he gets better soon and is able to keep touring! It would be incredible to see Willie Nelson live. He really still has it! Even though he is 85 years old, he shows no signs of slowing down.

Did you know that Willie rescues horses for his ranch?

He has rescued over seventy horses and counting!