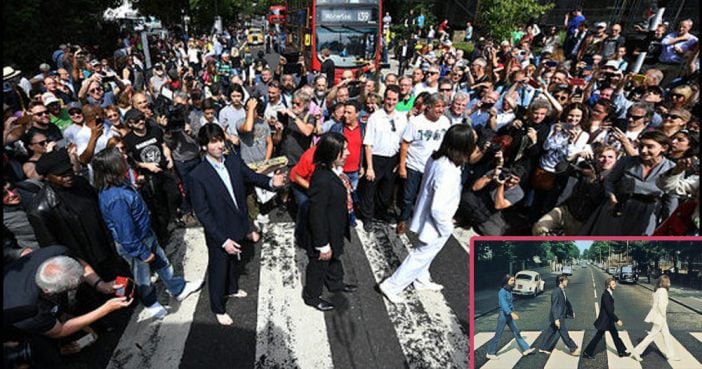 August 8th, 2019 marks 50 years since the original photoshoot took place at Abbey Road. In celebration of 50 whole years, thousands of fans gathered at the exact location. At least 3,500 fans would gather at the North London street, including Beatles impersonators and other diehard fans with their guitars.

While Beatles member Paul McCartney was absent from the event this year, he did cross Abbey Road last year. He would do so to celebrate 49 years before playing a gig at the studios.

Photo from the event, where several fans gather at Abbey Road for a 50-year celebration

In recent Beatles news, the new film Yesterday allegedly almost featured cameos from all four Beatles members. The film is about an alternate future in which only one man remembers the music of the Beatles.

Writer Richard Curtis and director Danny Boyle reveal more about what their intentions were for the film. “When [Jack] first goes to Liverpool, I’d written a long scene where he just goes to a pub and he bumps into George [Harrison] and Ringo [Starr],” Curtis says. “It was, I hope, a sweet scene, and they were just two delightful, oldish men who’d once been in a band together […] music enthusiasts who had never got any further.”

He goes on to say that McCartney would have appeared at the end of the film if plans worked out. “[Jack] was going to move to the Isle of Wight, to a cottage, and you were going to hear outside his window someone saying, ‘Vera, Chuck, Dave!’” Curtis explains. “There were going to be three dogs and Paul was going to be walking them.”

Imagine if that was what the movie was like! Have you seen Yesterday in theaters yet?

Do you remember the original iconic Abbey Road photoshoot? Check out the video from last year where McCartney makes the legendary walk across Abbey Road! Tons of Beatles fans cheer him on as he does so.

John Lennon once came clean that there was only one Paul McCartney song he actually liked. Read more about their friendly feud here!