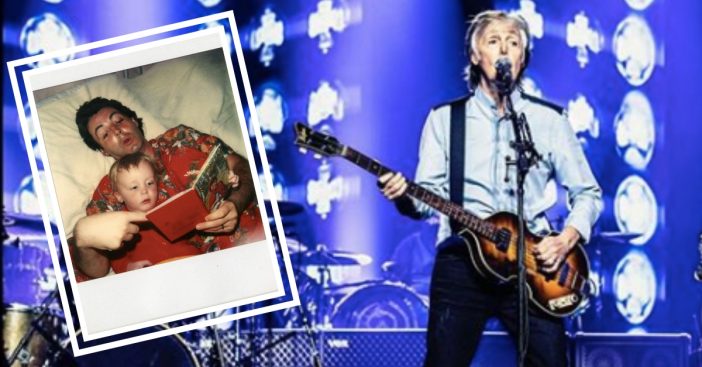 Bassist of The Beatles, Paul McCartney, recently posted a heartwarming throwback photo on his Instagram of himself with his son, James McCartney. The photo was not only in honor of his son, but also for World Book Day! The photo consisted of a much younger Paul McCartney reading a book to his son.

The caption on the photo read, “Paul reading to @jamesmccartneyofficial Polaroid by @lindamccartney #ThrowbackThursday #TBT #WorldBookDay #PaulMcCartney #LindaMcCartney #JamesMcCartney #Polaroid.” We can’t get over how adorable this photo is!

James McCartney has followed in his father’s footsteps and has become his own independent musician and songwriter. He has also contributed to a number of his father’s solo albums including  Flaming Pie (1997) and Driving Rain (2001) by Paul McCartney and Wide Prairie (1998) by Linda McCartney.

Back on February 5th, Paul McCartney offered some advice for people who want to become musicians and songwriters as his family and friends did. He said, “The only advice really is to do it… a lot. I have a songwriting class, and the first thing I say to them is, ‘Look, I don’t really know how to do this.’ At first they kind of look at me, but when you think about it, there is no formula. I know how to write one of my songs, but I can’t say, ‘You do it that way,’ because it’s a very personal thing. The advice is to just do whatever it is you’re doing … a lot!”

Paul McCartney recently released a new solo album in September of 2018 called Egypt Station. The album debuted at No. 1 on the US Billboard 200, in addition to it being his first US No. 1 album since Tug of War in 1982 and his eighth No. 1 album overall.

One of the song’s promotional singles, “Back in Brazil,” was deemed one of the weirdest songs on the album, but also commended the musician for managing to play over 9 instruments in the song himself.

It seems like his son is following in a very similar musical direction. In 2012, his son told BBC that he was interested in forming a ‘next generation’ version of The Beatles with Sean Lennon, Zak Starkey, and Dhani Harrison.

Despite considering this (and nothing is confirmed just yet) the up-and-coming songwriter continues to release solo music, his most recent studio album being The Blackberry Train (2016).

Be sure to SHARE this article if you love the McCartney family!

Check out the video below of a recent performance from one of Paul McCartney’s shows: