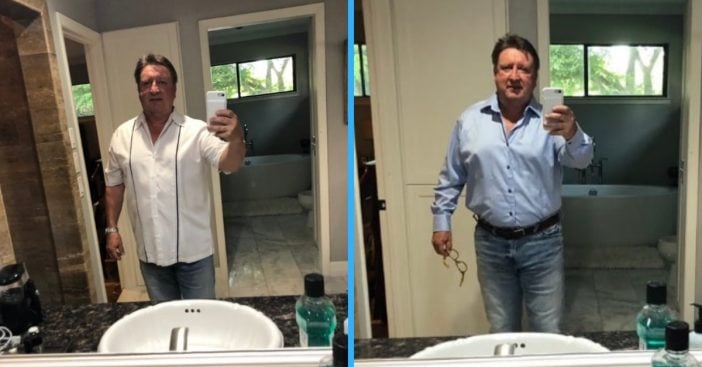 Jeff is just a single dad in Texas. He was getting ready for a date and needed fashion advice from his 19-year-old daughter Carli Saville. She tweeted out some photos of her dad trying on outfits because she thought it was so cute. Jeff and Carli had no idea the photos would go viral and the Internet would fall in love with Jeff.

Carli first posted some text messages from her dad, with photos. He asked Carli what he should wear for his date. She tweeted out the photos and messages with the caption, “Life with a single dad, asking for advice on dad outfits. My heart.”

See the photos of Jeff that went viral

In the photos, Jeff is trying on two different shirts. He can’t seem to decide which shirt and if he should tuck them in or not. When Carli doesn’t respond right away, he nudges her by texting, “Hello.”

Many Twitter users shared their own stories about their single dad going on dates. Others tweeted out that their mom was looking for a nice guy. Either way, everyone seemed to love Jeff and thinks he deserves the world!

Later, Carli admitted that Jeff got stood up for the date. To make matters worse, Carli did not ask her dad if she could post his photos. Imagine his shock when he saw himself go viral! However, he ended up loving the attention. Carli said he was getting excited watching the retweets go up and seeing all of the comments.

Now, he has his own Twitter account. He said, “I feel like God has given me something of a platform, in a crazy kind of way, to deliver a message about how special a relationship is. I know enough from being divorced and I know where I need to be now in my life. I have 30 or 40 years left, and if I’m lucky, I want to get them right.”

Now, he admits he is being asked out a lot. He is very private about who he is actually talking to, but admits that the whole thing is very unusual but fun! Even his local community saw the tweet. The last time he walked into a restaurant, the whole place applauded. He said he “nearly fell to his knees.”

Carli just hopes that her dad will find love and happiness. According to Yahoo, she said, “I hope it brings him a soulmate and someone that can bring him happiness for a lifetime. He deserves it more than anyone I know!”

Dads are so funny!

Check out this dad’s reaction to going to Costco for the first time.