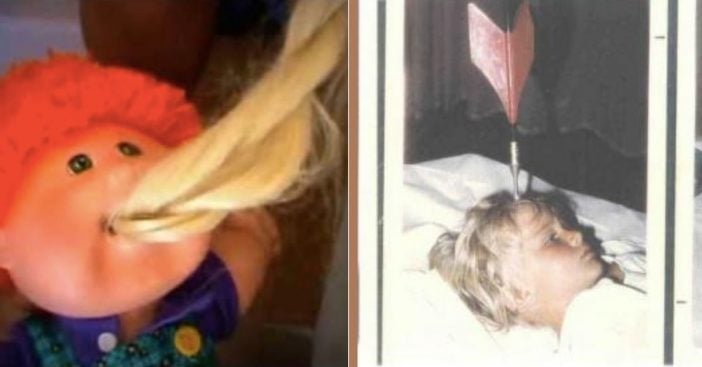 Clackers consists of two large acrylic balls, which hung on either end of a heavy string. The two balls would swing apart and together, making the loud clacking noise that gave the toy its name. If swung too hard, the acrylic balls would shatter, sending flying shards of it everywhere. The ban of Clackers takes place in 1985.

Letting small children handle hot surfaces and items? No way! Easy bake ovens have been around for a very long time, and are made to be much safer now. Many believe that Easy Bake Ovens should’ve never hit store shelves since it’s directed towards children to handle hot objects. Adult supervision should always be a requirement when handling this toy!

Aquadots is the toy that allows kids to make different shapes out of colored beads. However, these beads allegedly contain a very strong sedative so those who use them began to literally lose consciousness. The toy was recalled in 2007.

Sky Dancers were a very popular toy in the early 2000s. Just place the toy fairy on its base, pull the string, and it will helicopter itself up into the air! However, having the toy launch much too close to a child’s face would cause serious eye damage, making it fairly dangerous if not used the proper way.

The Lego brand has been incredibly successful with kids, back then and now. However, when Magnetix comes out, no one realizes how dangerous it would be for children to play with toy magnets. Soon, they would begin coming loose, children would put them in their mouths, and start to choke!

Everyone loves the idea of a hammock. Just being able to relax in the outdoors and enjoy the fresh air. However, mini hammocks were popular due to the fact that they were easy storage and had no spreader bars. But this meant that it was all too easy for the net to twist and turn, and potentially trap and suffocate a child.

Swing wings were incredibly popular in the 1960s. Kids loved this helmet, but it was quickly recalled due to cerebral hemorrhage and spinal injuries.

Do you remember any of these potentially dangerous children’s toys? Take a look at this study that says it might be better for kids to have fewer toys! Find out why.