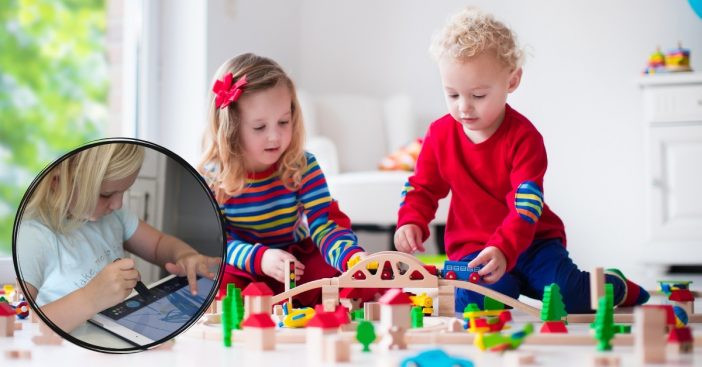 Attention parents and grandparents! A recent study has shown that it’s better for your little ones to have fewer toys, so you might not want to run to your nearest toy store just yet. According to the Infant Behavior and Development Journal, an environment with fewer toys is better for kids and this is why.

Researchers studied groups of toddlers and gave the groups either four toys or sixteen toys. According to the study, kids who were given fewer toys focused more, were more engaged, played creatively, and interacted with their toys in a variety of innovative ways for longer periods of time. Essentially, less chaos of a massive amount of toys equaled more focus in the toddler’s upbringing.

The American Academy of Pediatrics has reported that certain types of toys are better than others and the simpler ones tend to be the best for children’s upbringing. Apparently, the best toys for them to play with are the non-electronic ones with no screens or apps (meaning you shouldn’t just pop an iPhone or iPad in front of their face and call it a day)!

Alan Mendelsohn, MD, FAAP, made a statement in the AAP, saying, “The best toys are those that support parents and children playing, pretending, and interacting together… You just don’t reap the same rewards from a tablet or screen. And when children play with parents — the real magic happens, whether they are pretending with toy characters or building blocks or puzzles together.”

Now, of course, it can be hard to get the whole family on board with giving fewer toys to the baby of the family. How exactly do you get everyone on board?

Professionals that spoke with Good Housekeeping provided some expert advice on how to deal with family members giving a little too much this Christmas season when you really would like to cut back per your child’s benefit.

The professionals have stated that their best tips are as follows:

Be sure to SHARE this article with your friends and family! You never know who might be wanting fewer toys in hopes of benefitting their child’s upbringing.

Previous article: See A Full List Of Your Favorite Restaurants Open On New Year’s Day
Next Post: This Is Why Julie Andrews Immediately Said No To Appearing In ‘Mary Poppins Returns’