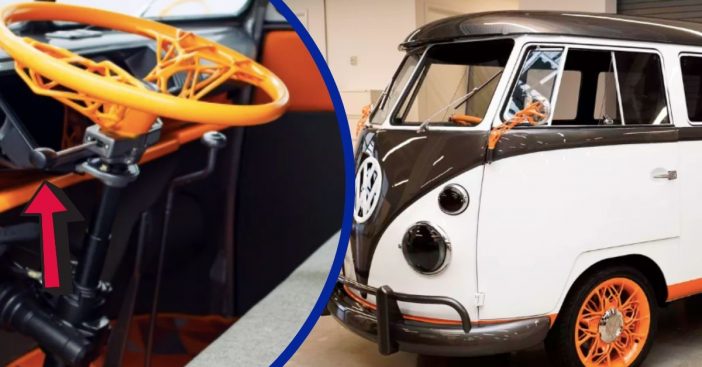 Can you imagine a 1960s vehicle getting 2019 upgrades such as voice control and biometric security via a 720p camera? This 1962 Volkswagen Type 20 recently got one of those upgrades and it’s pretty neat to see the huge change! Volkswagen produced its new concept based on the iconic campervan.

The Type 20 vehicle began as a Type 2 Microbus that was manufactured in 1962. The new features for the vehicle include biometric security, a holographic display, a voice assistant, and an all-electric drivetrain. At first glance, it looks like a simple retro vehicle… until you look a little closer!

The modern-day technology of the Volkswagen Type 20

A “generative design” process was used to maximize strength while minimizing weight, which gives the vehicle its retro appearance. The result is very organic-looking of a vintage 1960s Microbus, but when you look a little closer, you’ll see these small flourishes of modern technology.

The voice assistant can be accessed from both inside and outside the vehicle. You can also use the biometric security camera as face recognition to unlock the car door. How cool is that?!

Additionally, the car’s Volkswagen logo will flash like an Amazon Echo when you say the “Hey auto.” Just like you would say “Hey Alexa” when talking to your Echo! The holographic display behind the steering wheel also shows your speed and acts as a sat-nav.

Volkswagen has not provided any range estimates yet for the Type 20. As a matter of fact, Volkswagen does not plan to mass-produce these models at all. However, for those who are interested in an all-electric Microbus, there are options!

Volkswagen has one coming up on the market called the I.D. Buzz in 2020. It will be just one small portion of the company’s all-electric I.D. lineup. This will also include the Buzz Cargo, Vizzion, and the ID.3. We’re so excited to see what Volkswagen comes up with for these all-electric vehicles!

See it in action below!

Are you a ‘cars’ kind of person?

Check out this story on 13 cars we wish were still made today! You might remember some of these.

Previous article: Do You Remember Olivia Newton-John’s No. 1 Hit “Have You Never Been Mellow”?
Next Post: David Cassidy’s Family Reveals The Last-Minute Change To His Will That Stunned Everyone