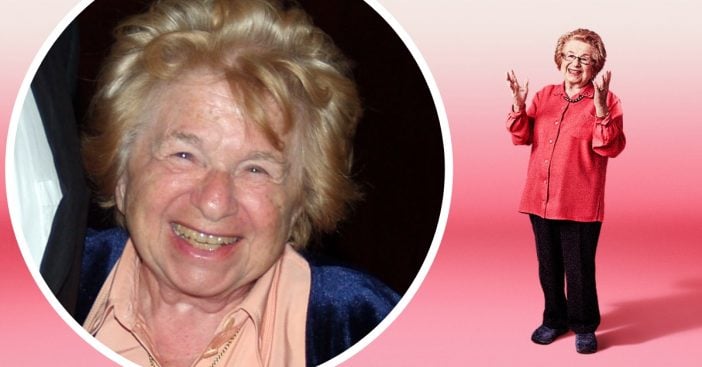 Do you remember Dr. Ruth? As 91-year-old Ruth Westheimer gears up to have a Hulu special called Ask Dr. Ruth, we remember where she came from. She is a famous sex therapist, author, and television personality that gained fame in the 1980s. She is still going today and even tweets at 91!

While many people shied away from talking about sex in the ’80s, Dr. Ruth challenged people to talk about it. She had a radio show called Sexually Speaking and has hosted several television shows. She has also written 40 books! Have you read any of her books? While many are on the subject of sexual health, she has even written children’s books and an autobiography.

Learn more about her new documentary

Her new documentary Ask Dr. Ruth follows her journey as a German-Jewish refugee during the Holocaust to the media icon she is today. Even at 91, she shows no signs of slowing down. She is on the board of the Museum of Jewish Heritage, she teaches college courses and has an active social life. She said she loves to go to the opera, concerts, and more.

The documentary is now playing exclusively on Hulu. The description states, “Ask Dr. Ruth chronicles the incredible life of Dr. Ruth Westheimer, a Holocaust survivor who became America’s most famous sex therapist. As her 90th birthday approaches, she revisits her painful past and career at the forefront of the sexual revolution.”

Hey @JeffBezos I hope you're going to put some condoms on sale for Amazon Prime Day.

Dr. Ruth said that she is lucky that she is healthy, but her secrets to longevity are to be interested in what you’re doing and what other people are doing. She also credits humor to her long life. She often tweets funny phrases to her followers. We are cracking up at her recent tweet above!

According to The New York Times, she said, “In the Jewish tradition, in the Talmud, it says, ‘A lesson taught with humor is a lesson retained.’ I could not tell you a joke, but I can use humor where it’s appropriate.”

If you are interested in watching Ask Dr. Ruth on Hulu, click here to watch. Keep in mind that you need a Hulu subscription in order to watch the documentary. Watch the official trailer below:

Speaking of ‘sexy’ doctors, this woman got in trouble for posting a photo of her ‘fine’ doctor without his permission online!