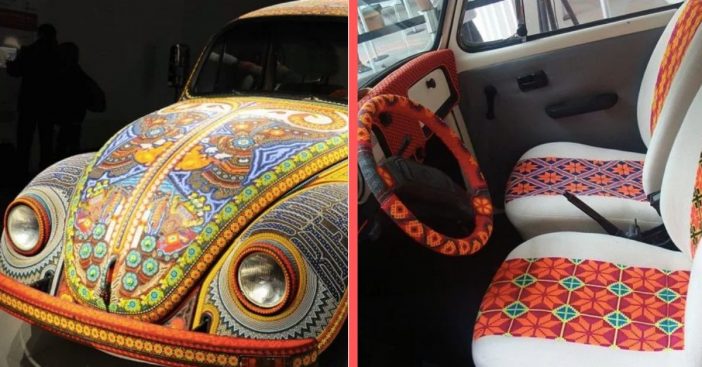 You can now say that you have seen a Volkswagen Bug made out of beads… and not only beads, over 2 million of them! The Volkswagen Beetle first rolled out in 1938 and this model in specific is definitely one of the most decorative. By the time production on these Bugs ends in 2003, over 21 million units surpass production!

Fun fact, the manufacturing of the Beetle was originally by Adolf Hitler. His intention was to design a car that was affordable for everyone. As a result, the Beetle is a beloved car that has been used by millions of people worldwide. The last Beetle car to be produced was delivered directly to the VW museum in Wolfsburg, Germany.

One of the reasons why the Beetle was so popular was because it was so customizable. The Vochol is no different, as it contains over 2 million beads. As you can see from the photo above, it looks incredibly psychedelic and colorful! I would totally drive this.

There is actually a lot of cultural history behind the Vochol. It is rooted in the culture of the Huichol Indians of Nayarit and Jalisco states, Mexico. They are known for their intricate beadwork, which explains a lot about this beautiful car!

Artists Francisco Bautista Carrillo and his daughter Kena Bautista are responsible for this beautiful beadwork. Along with the help of six other artisans, they were able to create something beautiful and unique out of this Bug. The project began in 2010 with the purpose of promoting Huichol culture in addition to their artistic skills.

This project took a total of 4,760 hours to complete, and they ended up using exactly 2,277,000 beads. The project was then finalized at the Muse de Arte Popular in Mexico City.

Some of the designs on the car include images of the gods of fire, corn, sun, peyote, and deer. Additionally, there is a representation of the Eye of God. The phrases “100 years since the Mexican Revolution” and “200 years of Independence” in the native Huichol language are also on the car’s front fenders.

What a stunning car!

The history of the Volkswagen Beetle is pretty interesting! For more background information on the car, check out the video below!

Do you remember any of these classic 1950s cars? Maybe you owned one of them!