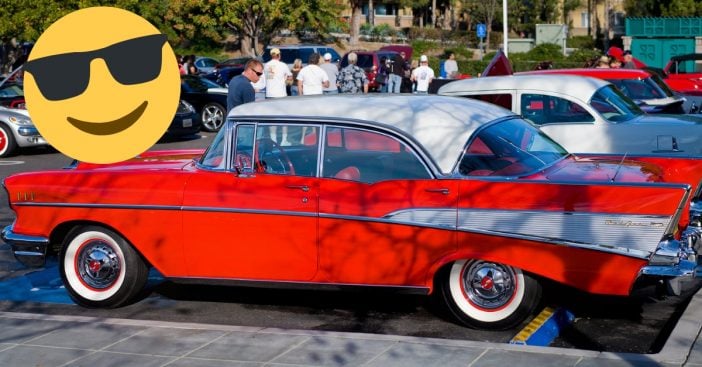 The 1950s were the era of classic cars. There were so many great cars made that we still love to look at and drive in today. These photos might just bring up some great memories from the past and make you long for the days spent driving in these cars.

We rounded up a list of some of the most recognizable cars from the 1950s. Some were more attainable and some were very expensive race cars you probably only dreamed of owning. How many of these cars made in the ’50s do you remember?

The Buick Skylark had one of the biggest engines of the decade! (And my personal favorite from this list, I mean, just look at the video below! I wanna make a bid so bad!)

The car also had technology that made it shift much easier than other cars. It also had power steering, power brakes, and a convertible top. In 1953, a new one would cost about $4,500.

Many people know and love Corvettes. Near the end of the ’50s, this Corvette had more chrome and a bigger engine.

There were many different options as well, including different speeds and you could choose automatic or manual.

In 1959, the brand Pontiac had been around for about 50 years already! They wanted to create a new and unique car and the Bonneville was born.

It was one of the longest cars in that time and had a lot of horsepower. That orange paint job in the Bonneville below in the video is gorgeous too. Love it!

Many people know the Studebaker brand for their front ends. If you’re familiar with a Packard, this car was essentially just a remake of the Packard after Studebaker bought them out.

They made sure to make the front end look like a Studebaker, though!

This vehicle was very important to NASCAR. It won many races with different legends like Herb Thomas. So, you know it was fast! Many people called it “The Fabulous Hudson Hornet.” Enjoy a nice walk around of a beautiful ’54 Hudson Hornet below!

Many call this car the most recognizable American cars of all time! Surely, you’ve seen many photos of this car near a soda shop or cruising down the street.

This was the second generation of the car and had some improvements like a bigger engine.

If you were well-off, you might have owned a Jaguar XKSS.

Actor and race car driver Steve McQueen owned one and made it famous.

Another very fancy car was the Ferrari 250 MM, with the double M’s standing for Mille Miglia. This was also a racecar that was from Italy.

It would have cost you around $12,000 which was very expensive!

Another Italian-designed car makes the list because of how fast it was. It could reach 100 miles per hour in only 21 seconds! It was a beautiful car but is known for overheating.

Last but not least, here is another gorgeous vehicle. In 1999, they actually named it the sports car of the century!

Did you own or get to drive any of these 1950s cars on this list? Which ones do you like the most?

If you want to keep the nostalgia rolling, check out this list of classic cars we wish were still around today!